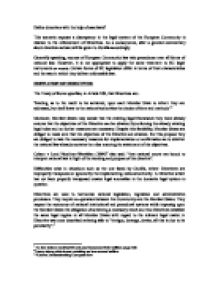 Eu Directives Problem Case. Difficulties arise in situations such as the one faced by Gunilla, where Directives are improperly transposed or ignored by the implementing national authority.

Define directives with the help of case laws? This scenario exposes a discrepancy in the legal system of the European Community in relation to the enforcement of Directives. As a consequence, after a general commentary about directives advice will be given to Gunilla accordingly. Generally speaking, sources of European Community law take precedence over all forms of national law. However, it is not appropriate to apply the same treatment to EC legal instruments en masse. Certain forms of EC legislation differ in terms of their characteristics and the way in which they deliver enforceable law. DEFINATION OF DIRECTIVES: The Treaty of Rome specifies, in Article 249, that Directives are:- "binding, as to the result to be achieved, upon each Member State to which they are addressed, but shall leave to the national authorities the choice of form and methods."1 Moreover, Member States may decide that the existing legal framework they have already ensures that the objectives of the Directive can be obtained by enforcing the already existing legal rules and no further measures are necessary. Despite this flexibility, Member States are obliged to make sure that the objectives of the Directive are attained. For this purpose they are obliged to take the necessary measures for implementation or confirmation as to whether the national law already contains the rules ensuring the attainment of the objectives. ...read more.

Mary's22 the court decided that the definition of 'the State' should be a 'broad one'. Schools and other educational establishments would therefore be part of the 'the State'. An emanation of the State could be defined as a body that had been made responsible, pursuant to a measure adopted by the State, for providing a public service that was under the control of the State and which exercised special powers for the purpose, beyond those which operated between individuals. The powers of the local authority and the Secretary of State for Education meant that education was a public service under the control of the State. Grant maintained Schools would therefore be part of' the state'. Also the case of Marshal v Southampton23 shows that 'the State' is 'the State' regardless of what functions it is performing. Gunilla should also be informed that damages may be awarded as a remedy in situations where a Member State fails to transpose EU law. Where applicable the liability of the Member State is determined by the non-implementation of a Directive and a technical breach of its EU duties. In this case the United Kingdom could be compelled to rectify directly the damage done to Gunilla by this failure. ...read more.

Therefore the EU and other Member States could find the UK is in breach and bring an action against it and as Gunilla's rights had been breached by the State's actions it may be found liable and has to pay reparation to the citizen. It may well be, therefore, that Gunilla has claim for compensation against the UK. Any damages they do obtain must compensate them in full for losses directly incurred because of the breach31. Conclusion:- Direct effect, indirect effect and State liability are crucially important for the protection of individuals' Community law rights in national courts. On the basis of the above considerations, one may identify several important principles that guide the transposition of and the implementation of directives. First, it is the principle of discretion, which allows a member state to choose the form and the method of implementation. Secondly, an important principle is the obligation imposed on member states to implement directives either through adopting national measures or through adapting already existing measures so that the result pursued by the directive in question is achieved. Thirdly, the implementation of directives is subject to the administrative control of the Commission under Article 226, to the indirect control of other member states under the procedure under Article 227 and to the judicial control of the Court of justice pursuant to the two provisions. ...read more.