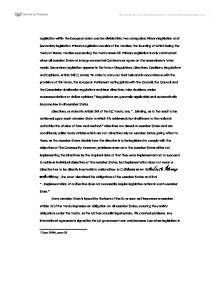 Legislation within the European Union can be divided into two categories; Primary legislation and Secondary legislation. Primary Legislation consists of the Treaties; The founding of which being the Treaty of Rome. Treaties succeeding the Treaty amend it. Primary Legislation is only constructed when all Member States at Intergovernmental Conferences agree on the amendments to be made. Secondary Legislation appears in the form of Regulations, Directives, Decisions, Regulations and Opinions. Article 249(1) states; "In order to carry out their task and in accordance with the provisions of this treaty, the European Parliament acting jointly with the Council, the Council and the Commission shall make regulations and issue directives, take decisions, make recommendations or deliver opinions." Regulations are generally applicable and automatically become law in all Member States. Directives, as stated in Article 249 of the EC Treaty, are; "...binding, as to the result to be achieved, upon each Member State to which it is addressed, but shall leave to the national authorities the choice of form and method." Directives are aimed at Member States and are conditional, unlike Treaty articles which are not. ...read more.

Regulations and Treaties become part of UK Law and are therefore directly applicable. Directives however are not as there must be a piece of UK legislation implementing it to become part of UK law. EU Law is directly effective as it can be enforced in a UK court. Direct Effect can be partitioned into two types; horizontal direct effect and vertical direct effect. Law that is vertically effective is only enforced against the State; however horizontal direct effect is the concept of Community Law being enforceable against individuals; either people or companies. Directives are only vertically effective, Unlike Regulations and Treaties which are both vertically and horizontally effective. From the unambiguous wording of Article 249 of the Treaty, it is clear that Directives are not to be directly applicable by the same token as Regulations. Decisions however are only enforceable against the parties to which they are addressed. As Directives are commands to a State for the introduction of law into the State's own Law, they are only able in having vertical effect. Directives are not automatically directly effective and conditions apply regarding their enforcement in a National Court. ...read more.

In Marshall v Southampton and South West Hampshire Area Health Authority5 the Court of Justice stated a directive could only be enforced against the state, and that the State is the State despite the purpose it executes. Subsequent to the Marshall case, Foster v British Gas6, the ECJ held that any body providing a public service under state control, which possesses special powers exceeding those normally applicable, would be an emanation of the state. Deriving from the Foster case, three important cases have considered the 'emanation of the state' concept, and the application of the test put down in Foster. One case being National Union of Teachers v The Governing Body of St Mary's Church of England (Aided) Junior School7 held that the State should be defined broadly, and schools and other educational establishments were part of the State. If the further tests under Foster are satisfied, then a Directive is Directly Effective. 1 Case 29/84, para 23 2 Van Gend en Loos v Nederlandse Administratie der Belastingen (1963) ECR 1 Case 26/62 3 (1974) ECR 1337 Case 41/74 4 (1979) ECR 1629 Case 148/78 5 (1986) ECR 723 Case 152/84 6 (1990) ECR I-3313 Case C-188/89 7 [1997] IRLR 630 ?? ?? ?? ?? ...read more.