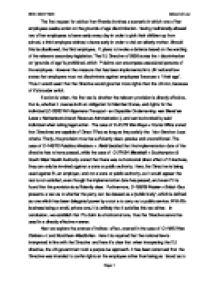 The first request for advice from Brenda involves a scenario in which one of her employees seeks action on the grounds of age discrimination. Having traditionally allowed two of her employees to leave early every day in order to pick their children up from school, a third employee wishes to leave early in order to visit an elderly mother. Should this be disallowed, the third employee, P, plans to invoke a defence based on the wording of the relevant secondary legislation. The EU Directive of 2006 states that discrimination on 'grounds of age' is prohibited, which P claims can encompass associated persons of the employee. However the measure that has been implemented into UK national law states that employers must not discriminate against employees 'because of their age'. Thus it would seem that the Directive would give her more rights than the UK Act, because of it's broader ambit. If action is taken, the first test is whether the relevant provision is directly effective, that is, whether it creates both an obligation for Member States, and rights for the individual (C-26/62 NV Algemene Transport- en Expeditie Onderneming van Gend en Loos v Netherlands Inland Revenue Administration), and can be invoked by said individual when taking legal action. The case of C-41/74 Van Duyn v Home Office stated that Directives are capable of Direct Effect as long as they satisfy the Van Gend en Loos criteria. ...read more.

As of the first principle, indistinctly applicable measures can be prohibited, so Article 34,can still prohibit these measures though they don't blatantly prejudice importers. The mutual recognition principal aims to prevent the banning of the sale of products which are lawfully produced in another Member State, even if they were manufactured according to technical and quality rules different from those that must be met by domestic products. This relates to the requirement of a 'finishing and polishing area', if the jewellery passes standards of UK law, they are of an acceptable standard to sell in any Member State. With regards to the requirement of registration, the principal is designed to prevent the need for undergoing procedures repeatedly (the dual-burden principal). So, unless the French government can justify the measures using either a Cassis mandatory requirement or an Article 36 justification, they amount to MEQRs. From the Cassis mandatory requirements, the French government would use the 'defence of the consumer' avenue, which covers both measures, while using the public policy derogation from Article 36 to justify the culturally prized finishing and polishing stage. These justifications must now undergo a 'proportionality test', as of the case C-261/81 Walter Rau Lebensmittelwerke v De Smedt PVBA. Here it is stated that when the measure 'exceeds the requirements of the object in view, consumers may in fact be protected just as effectively by other measures'. ...read more.

On the face of it, the justification seems fair given the spate of deaths of toddlers, however, being a blanket ban it is very restrictive. From past case law, there seems to be a tendency of the ECJ to lean towards health warning labels, for example in Case C-178/84 Commission v Germany, where health labels were recommended, which are less restrictive but still achieve the aim required. Though, due to the severity of the situation in Poland, it is possible that this alternative may not be found to be effective in reducing the deaths by the ECJ, so it could deem the higher standards proportionate. If any of the above measures are disproportionate MEQRs, she can rely on Article 34 in court in an action against the authority because it is directly effective according to the test put forward in the case of van Gend en Loos. This required four things, the provision to be sufficiently clear, which of course is applicable here as it is a short concise article stating the prohibition of quantitative restrictions and MEQRS. Next the article has to be unconditional, which it is. It must be based on negative obligation, which here it is requiring Member States not to do something (ie. place quantitive restrictions or MEQRs on imports). Finally it must not require further legislation on the part of the Member State, which here it doesn't. B can thus use this legislation to launch action against the authorities, or continue business and use it as a defence, should the authorities launch action. ...read more.