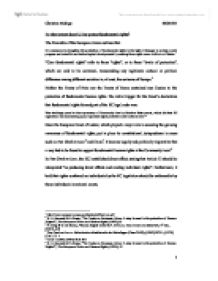 To what extent does EU law protect fundamental rights? The Preamble of the European Union outlines that: it is necessary to strengthen the protection of fundamental rights in the light of changes in society, social progress and scientific and technological developments by making those rights more visible in a Charter.1 "Core fundamental rights" refer to those "rights", or to those "levels of protection", which are said to be universal, transcending any legitimate cultural or political difference among different societies in, at least, the universe of Europe.2 Neither the Treaty of Paris nor the Treaty of Rome contained any illusion to the protection of fundamental human rights. The initial trigger for the Court's declaration that fundamental rights formed part of the EC legal order was: "the challenge posed to the supremacy of Community law by Member State courts, which felt that EC legislation was encroaching upon important rights protected under national law.3" Once the European Court of Justice, which played a major role in securing the growing awareness of fundamental rights, put in place its constitutional jurisprudence in cases such as Van Gend en Loos4 and Costa5, it became legally and politically imperative that a way had to be found to support fundamental human rights at the Community level.6 In Van Gend en Loos, the ECJ established direct effect, stating that Article 12 should be interpreted "as producing direct effects and reading individual rights". ...read more.

The case discloses how the EU increasingly endeavoured to defend fundamental rights. Individuals can rely on the European Court of Human Rights when fighting for their fundamental rights. Accepted legally binding obligations to secure the classical human rights for all persons within their jurisdiction and to allow all individuals, to bring claims against them leading to a binding judgement by an international court finding them in breach16. In the case of Dudgeon17, the applicant was a shipping clerk and gay activist in Belfast, Ireland. He claimed that the police investigation in relation to his homosexuality was in breach of his right under Article 8 of the ECHR. The Court agreed with the commission that Northern Ireland's criminalisation of homosexual acts between consenting adults was a violation of Article 8 of the ECHR. However, the ruling continued, "it was for countries to fix for themselves...any appropriate extension of the age of consent in relation to such conduct."Dudgeon's case displays that the EU is inclined to point out at fundamental rights but will not attempt to enforce them. In 1999, the European Council launched an initiative to draft a Charter of Fundamental Rights for the EU. The Charter was solemnly proclaimed by the Commission, Parliament, and Council and was politically approved by the Member States at the Nice European Council summit in 2000. ...read more.