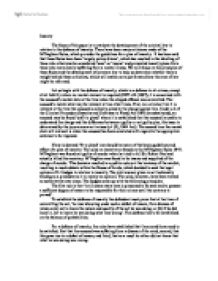 Evaluate the development of the criminal law in relation to the defence of insanity.

Insanity The focus of this paper is to evaluate the development of the criminal law in relation to the defence of insanity. There have been many criticisms made of the M'Naghten Rules, which provides the guidelines for a plea of insanity. It has been said that these Rules have been 'largely policy driven', which has resulted in the labelling of those who otherwise be considered 'sane' as 'insane' and prevented insanity pleas from those who were clearly suffering from a mental illness. We will focus on the principles of these Rules and the development of common law to help us determine whether there is weight behind these criticisms, which will enable us to put forward how the area of law might be reformed. Let us begin with the defence of insanity, which is a defence to all crimes, except strict liability where no mental element is required (DPP v H (1997), it is concerned with the accused's mental state at the time when the alleged offence was committed. The accused's mental state may be relevant at two other times. First, in a criminal trial it is relevant at the time the accused is called to plead to the charge against him. Under s.2 of the Criminal Procedure (Insanity and Unfitness to Plead) Act 1991 (as substituted), an accused may be found 'unfit to plead' where it is established that the accused is unable to understand ...read more.

The use of such criterion to distinguish insanity from automatism seems somewhat fatuous. For example, hypoglycaemic coma is an internal cause, which results from an overproduction of insulin by the pancreas, and should the sufferer of such disease commit an offence the result would be the finding of insanity. Is a person suffering from such a condition more deserving of the label 'criminally insane' than a diabetic who fails eat after insulin2? The current state of law fails to clarify this. The case of Sullivan3 gives us further scope as to the frailties within the legal definition 'disease of mind'. The defence was raised that, the attack was committed in the course of an epileptic seizure and he was not aware of doing it. It was held however that the defence of automatism was really a defence of insanity, which resulted in the defendant changing his plea from not guilty to guilty. Sullivan indicates, the defences of insanity and automatism are closely linked, as for both defences the accused has acted while not in control of his mental faculties. However, Lord Diplock stated that the defence of automatism would only be available where temporary impairment resulted from an external physical factor. This would demonstrate that a person suffering a epileptic attack who commits an offence would be presumed insane for the purpose of criminal liability whereas a diabetic in hypoglycaemic coma, caused by low low-sugar, is not. ...read more.

The disease can be of any part of the body if it has effect on the mind; for example, arteriosclerosis affecting the flow of blood to the brain (Kemp (1957); or high blood sugar levels because of diabetes (Hennessey (1989)). The disease can be one, which causes a transient or intermittent impairment of reason, memory or understanding. The condition need not be permanent (Sullivan (1984)). Where the cause is external and not a disease, then this is not insanity; for example the effect of a drug (quick (1973)). The concept of insanity is at the heart of debates about the effect of the accused mental state. The scope and limits of insanity are a major factor in shaping other defences founded on states of automatism, intoxication and diminished responsibility. More fundamentally, the recognition of an insanity defence is a mark of the maturity and humanity of the criminal law. As the Royal Commission on Capital punishment commented fifty years ago, "it has for centuries been recognised that, if a person was, at the time of his unlawful act, mentally so disordered that it would e reasonable to impute guilt to him, he ought not to be held liable to conviction and punishment under criminal law". 1 Kemp [1957] 1 QB 399 2 Quick [1973] QB 910 3 4 Hennessy [1989] 2 ALL ER 9. D 5 s. 1 of the Mental Health Act 1983 6 Butler Report On Mentally Disordered Offenders in 1975 7 Draft Criminal Code of 1989 (Law Com No. 177) ...read more.