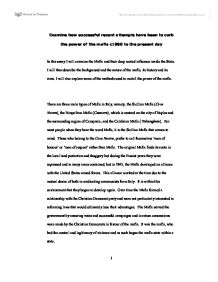 Examine how successful recent attempts have been to curb the power of the mafia c1980 to the present day.

Examine how successful recent attempts have been to curb the power of the mafia c1980 to the present day In this essay I will examine the Mafia and their deep rooted influence inside the State. I will then describe the background and the nature of the mafia, its history and its aims. I will also explore some of the methods used to curtail the power of the mafia. There are three main types of Mafia in Italy, namely, the Sicilian Mafia (Cosa Nostra), the Neapolitan Mafia (Camorra), which is centred on the city of Naples and the surrounding region of Campania, and the Calabrian Mafia ('Ndrangheta). For most people when they hear the word Mafia, it is the Sicilian Mafia that comes to mind. Those who belong to the Cosa Nostra, prefer to call themselves 'men of honour' or 'men of respect' rather than Mafia. The original Mafia finds its roots in the local land protection and thuggery but during the Fascist years they were repressed and in many areas contained, but in 1945, the Mafia developed an alliance with the United States armed forces. This alliance worked at the time due to the mutual desire of both in eradicating communists from Italy. It is within this environment that they began to develop again. Over time the Mafia formed a relationship with the Christian Democrat party and were not particularly interested in reforming laws that would ultimately lose their advantages. The Mafia served the government by ensuring votes and successful campaigns and in return concessions were made by the Christian Democrats in favour of the mafia. ...read more.

gave us protection, such as acquittals, reduced sentences and domiciliary arrests. In return we killed anybody who annoyed them'12 In 1981, a Parliamentary Committee Enquiry report declared that members of the P2 lodge were responsible for belonging to an organisation whose aim was to intervene secretly in the political life of the country. These laws that were made to combat the Mafia were not flexible enough to be used, as an example the restrictive and rigid description of what constituted a Mafia group. As it was seen in P2, all levels of government were involved in secret societies and in a bold effort to strike a blow at the Southern Problem, the government launched the Cassa per il Mezzogiorno (Fund for the South) in 1950. A major investment in southern infrastructure and economic development, the Cassa poured substantial sums into the region, producing both visible results and widespread criticism of corruption and political influence peddling. One result was to increase southern demand for northern products by means of an infusion of cash into massive public works projects. Too often Cassa resources were controlled by such criminal organizations as the mafia (as well as the camorra and 'Ndrangheta), which, in turn, used the funds partly to strengthen alliances with the major political parties.13 On 30th April, 1982, the PCI regional secretary Pio La Torre with his driver was murdered. La Torre had become a target after he had co-sponsored a new draft law in March 1980 that would allow the judiciary to view bank records so that they could follow money trails, and would defined membership of the mafia as ...read more.

After several attempts the mafia finally succeeded to murder Falcone and his associate Borsellino. Following the 2 judges assassinations in 1992, the parliamentary Antimafia commission was reinvigorated setting the stage for different reports including the connections between mafia and freemasonry. At the same time the number of police was increased to specialise in organised crime, the investigating thereof. The mafias strategy of reacting with violence always seemed to backfire Trying to force the states hand just produced public distaste and anger On the day of Falcone funeral Oscar Luigi Scalfaro Christian democrat was called to the president of the republic instead of Andriotti because he had better record of opposing crime These murders caused an outcry as many before them had done but it was the catalyst used to bring forward much new legislation, following guidelines of Falcone himself, that resulted in may more prosecutions including that of the alleged head of the Cosa Nostra, Salvatore Riina released due to insufficient evidence, all in a remarkable event to reversing mafia destiny. Ginsborg feels that even after all this legislation and public discontent, the battle might already be lost as 12%+ of Gross Domestic Product is the result of criminal activity.21 In conclusion, although the true involvement of secret societies and Mafia have never been revealed, there will always be those judges, magistrates and investigators that will continue to uncover the darkest sides of politics and criminality. The legislation that has come since 1980, has shown that the power of the Mafia is being curbed, but at the same time the Mafia will exercise control elsewhere in different countries and will ensure its eventual survival. ...read more.