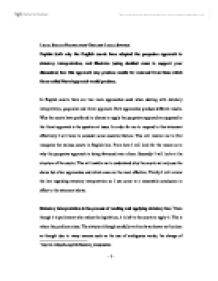 Explain both why the English courts have adopted the purposive approach to statutory interpretation, and illustrate (using decided cases to support your discussion) how this approach may produce results far removed from those which the so-called literal a

LEGAL SKILLS FOUNDATION/ ENGLISH LEGAL SYSTEM Explain both why the English courts have adopted the purposive approach to statutory interpretation, and illustrate (using decided cases to support your discussion) how this approach may produce results far removed from those which the so-called literal approach would produce. In English courts there are two main approaches used when dealing with statutory interpretation, purposive and literal approach. Both approaches produce different results. Why the courts have preferred to choose to apply the purposive approach as opposed to the literal approach is the question at issue. In order for me to respond to this statement effectively I will have to consider some essential factors. This will involve me to first recognize the various courts in English law. From here I will look for the reason as to why the purposive approach is being favoured over others. Secondly I will look at the structure of the courts. This will enable me to understand why the courts not only use the above but other approaches and which ones are the most effective. Thirdly I will review the law regarding statutory interpretation so I can come to a reasonable conclusion in effect to the statement above. Statutory interpretation is the process of reading and applying statutory law.1 Even though it is parliament who makes the legislation, it is left to the courts to apply it. This is where the problem arises. The statutes although carefully written have shown not be clear as thought due to many reasons such as the use of ambiguous words, the change of language over time and unforeseen developments. This therefore leads the judges to the difficult task of interpreting the law and making decisions according to the statute presented regardless of the clarity and context. Whether this is justifiable or not is another matter to discuss. Having said that parliament has provided some guidance to the interpretation by the establishment of the Interpretation Act 1978 as well some extra aids. ...read more.

Cross suggest that court takes a contextual approach. Judges look at the ordinary meaning of the word in the context of the statute, and then move on to consider other possibilities if this provide an absurd result. Willis points out that a statute is often capable of several different interpretations. The rule chosen will be the one that will produce the result that they themselves believe to be just. Griffith claims that where there is ambiguity, the judiciary chooses the interpretation that best suits their view of policy. The constitutional role of the judiciary is seen to be simply to apply the law, but it ignores the fact of how difficult it is for the judiciary to interpret legislation. This difficulty may have arisen due to the fact that there are problems within legislation itself. Courts have found implications of a statute not to be so clear in numerous occasions. Benninon (1999) has identified some of them; there may have been some unforeseen events after the legislation was produced, a broad term was used by the draftsmen allowing the user to interpret this term as they would see best and ambiguous words were used. In any of these cases the theory is that the role of the courts is to discover Parliament's intention. Since parliament is supreme source of law and therefore judiciary's constitutional duty is to put this into practice, rather than what they might think is the best interpretation. The idea of parliamentary intention is difficult concept to define, as it may have not been the intention of every Member of Parliament. The only people who may pay attention to the words of the statute are the Ministers who enforce them to get them through Parliament, civil servants who advise Ministers and draftsmen who draw up the legislation. None of this can be said to amount to Parliament. So the question arises that is on what is one to do in such a situation. ...read more.

Department of Health and Social Security [1981]. The courts adopted the broad interpretation of the section rather than the narrow literal interpretation. The courts are favourable to the purposive approach due to it's generality. It promotes the general legislative purpose underlying the provisions which can be said to cause the contrary by using the literal approach. Denning 'we do not sit her to pull the language of Parliament to pieces .... we sit here to find out the intention of Parliament and carry it out, we do this better by filling in the gaps and making sense of the enactment.'7 The whole purpose of statutory interpretation is to provide for the true intentions of Parliament, which the literal rule is clearly not undertaking. Instead the judges who do use the literal approach have excessively emphasised the literal meaning of statutory provisions without looking at the meaning in the wider context. This as a result has caused judges to clash on meanings of words as they are uncertain and that makes it harder for them to come to a reasoned conclusion in regards to the case their deciding. It seems that there are no fixed rules in relation to the application of statutory interpretation, since different rules produce different results. 'The golden rule is that there are no golden rules.' 8"Instead in each case we must look at all relevant circumstances and decide as a matter of judgement what weight to attach to any particular rule." Although both approaches produce different results, they both have one thing in common which is they assume that the enacted words have some meaning. However the courts have demonstrated their favouritism by choosing the purposive approach. Lord Cooke "while today the purposive approach is the governing one...other canons may come into play." The favouritism can be based on the simply reason that it gives effect to the intention of Parliament which is the underlying principle of Statutory interpretation. Word Count is 3,175. ...read more.