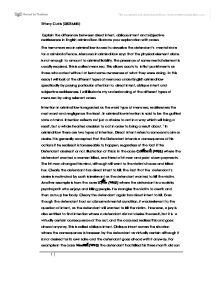 Explain the difference between direct intent, oblique intent and subjective recklessness in English criminal law. Illustrate your explanation with cases.

Explain the difference between direct intent, oblique intent and subjective recklessness in English criminal law. Illustrate your explanation with cases. The term mens rea in criminal law is used to describe the defendant's mental state for a criminal offence. Mens rea in criminal law says that the physical element alone is not enough to amount to criminal liability. The presence of some mental element is usually required. This is called mens rea. This allows courts to inflict punishments on those who acted without at least some awareness of what they were doing. In this essay I will look at the different types of mens rea under English criminal law specifically by paying particular attention to direct intent, oblique intent and subjective recklessness. I will illustrate my understanding of the different types of mens rea by using relevant cases. Intention in criminal law is regarded as the worst type of mens rea, recklessness the next worst and negligence the least. ...read more.

This is called oblique intent. Oblique intent covers the situation where the consequence is foreseen by the defendant as virtually certain although it is not desired for its own sake and the defendant goes ahead with it anyway. For example in the case Woollin (1998) the defendant had killed his three month old son by throwing him against a wall, fracturing his skull. The defendant did not deny doing this but claimed it was not intended and he didn't want his child to die. The judge directed the jury that it was open to convict woolin of murder if satisfied that he was aware there was a 'substantial risk' he would cause serious injury.ii Another example is R v Nedrick (1986) the defendant had a grudge against a woman, and poured paraffin through the letterbox of her house and set it alight. The woman's child died in the fire. Lord Lane considered that even if death or grievous bodily harm is not the defendant's wish or aim, the jury may infer ...read more.

A good example of this is shown clearly in R v Stephenson (1979) where the defendant who suffered from (schizophrenia) lit a fire in a haystack and destroyed it. Although because of his illness he did not realise that lighting a match would there was a risk to the haystack. Although it would have been foreseen by a reasonable person. The difference between these three terms are direct intent means that is accused actually wants the result to occur, and sets out to achieve it, whereas in oblique intent the accused did not desire a particular result but acted in a way where he or she realised it might occur. Recklessness means taking an unjustified risk where subjective recklessness defines that kind of harm might occur but he or she goes ahead with it anyway. This is illustrated well in Cunningham (1957) Word count 1,oo7 i Gardiner 1998 pg 227 ii Criminal law, Elliot and Quinn pg 58 iii Elliot and Quinn pg 58 iv " " pg 48 v Criminal Law, Herring 3rd ed, pg 149 ?? ?? ?? ?? Tiffany Curtis (08236445) 1 ...read more.