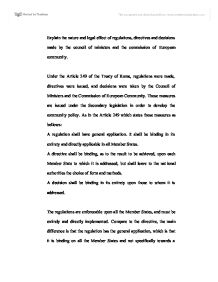 Explain the nature and legal effect of regulations, directives and decisions made by the council of ministers and the commission of European community.

Explain the nature and legal effect of regulations, directives and decisions made by the council of ministers and the commission of European community. Under the Article 249 of the Treaty of Rome, regulations were made, directives were issued, and decisions were taken by the Council of Ministers and the Commission of European Community. Those measures are issued under the Secondary legislation in order to develop the community policy. As in the Article 249 which states those measures as bellows: A regulation shall have general application. It shall be binding in its entirety and directly applicable in all Member States. A directive shall be binding, as to the result to be achieved, upon each Member State to which it is addressed, but shall leave to the national authorities the choice of form and methods. A decision shall be binding in its entirety upon those to whom it is addressed. The regulations are enforceable upon all the Member States, and must be entirely and directly implemented. Compare to the directive, the main difference is that the regulation has the general application, which is that it is binding on all the Member States and not specifically towards a named person or persons, so it is an abstract normative measure. ...read more.

When the matter was referred to the European Court of Justice it was held that Member States had no discretion in the case of regulations. The wording of Article 249 was explicit and meant that regulations were automatically law in all Member States. States could not pick and choose which ones they would implement. In this way regulations make sure that laws are uniform across all the Member States.( Martin 2002, p.78 ) Also, the regulation has the direct effect on the Member States, where the individual can rely on the regulation which is related to their rights to be against the state or the other individual when they suffered the serious damages if the states failed to carry out the regulation. Directives are issued for the harmonization of laws within the Member States when the national laws need to be modified or national provision must be enacted. Directives have already covered many social fields, such as, company laws, banking, insurance, health and safety of workers, equal rights, consumer laws and social security.(Martin 2002, p.79) ...read more.

that illustrates the individual can not rely on the directive to seek damages against another individual. Finally, decisions are the rather different measures from regulations and directives, because they have an administrative nature, implementing other Community rules, as in the case 226/87 Commission v. Greece ( Mathijsen 1999, p. 30,), and they can be addressed either to a Member State or a named individual( person or company), for example, decisions taken by the Commission under Regulation 17 in application of Article 81 and 82 EC( the competition rules). Obviously, the decision is recognized as a binding act on the addressees, and also has the direct effect to make sure that the Community rules are performed within the nations which is addressed by the decision appropriately and effectively. Above three measures are 'hard' laws since they all have the binding power, and there is no hierarchy among them, so we can not say the regulation is more powerful than the directive and the decision because they should be equally treated to develop the Community policy in a particular area. ...read more.