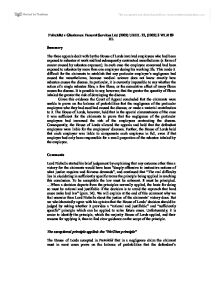 Fairchild v Glenhaven Funeral Services Ltd [2002] UKHL 22, [2002] 3 WLR 89 HL Summary The three appeals dealt with by the House of Lords involved employees who had been exposed to asbestos at work and had subsequently contracted mesothelioma (a form of cancer caused by asbestos exposure). In each case the employee concerned had been exposed to asbestos by more than one employer during his working life. This made it difficult for the claimants to establish that any particular employer's negligence had caused the mesothelioma, because medical science does not know exactly how asbestos causes the disease. In particular, it is currently impossible to say whether the action of a single asbestos fibre, a few fibres, or the cumulative effect of many fibres causes the disease. It is possible to say, however, that the greater the quantity of fibres inhaled the greater the risk of developing the disease. Given this evidence the Court of Appeal concluded that the claimants were unable to prove on the balance of probabilities that the negligence of the particular employers who they had sued had caused the disease, or made a material contribution to it. The House of Lords, however, held that in the special circumstances of the case it was sufficient for the claimants to prove that the negligence of the particular employers had increased the risk of the employees contracting the disease. Consequently, the House of Lords allowed the appeals and held that the defendant employers were liable for the employees' diseases. Further, the House of Lords held that each employer was liable to compensate each employee in full, even if that employer had only been responsible for a small proportion of the asbestos inhaled by the employee. Comments Lord Nicholls started his brief judgement by explaining that any outcome other than a victory for the claimants would have been "deeply offensive to instinctive notions of what justice requires and fairness demands", and continued that "The real difficulty lies in elucidating in sufficiently specific terms the principle being applied in reaching this conclusion. ...read more.

Thus it seems that so far as the reasons given by the House of Lords justify the "McGhee principle", they operate cumulatively. The scope of the "McGhee principle" (1) Wilsher v Essex Area Health Authority The scope of the "McGhee principle" can best be explored by considering how the members of the House of Lords treated the facts of Wilsher v Essex Area Health Authority [1987] QB 730, [1988] AC 1074. Four of their Lordships in Fairchild (Lord Nicholls being the exception) expressly stated (at paras 22, 70, 118 and 149) that the "McGhee principle" should not be extended to the facts of Wilsher. (As you may recall Wilsher involved a child who developed a serious eye condition (RLF). The defendant had negligently subjected the child to excess oxygen. But the medical evidence was that although excess oxygen could have caused the RLF, the child also suffered from four other conditions implicated as possible causes of RLF, and it could not be said that it was more probable that the excess oxygen had caused the RLF than that some other agent had caused it.) It is worth working out why their Lordships thought that the facts of Wilsher do not fall within the proper scope of the "McGhee principle", because it seems that in Wilsher it would have been impossible for the claimant to have proved any more than that the defendant's negligence increased the risk of RLF. Lord Bingham's explanation is that "It is one thing to treat an increase in risk as equivalent to the making of a material contribution where a single noxious agent is involved, but quite another where any one of a number of noxious agents may equally probably have caused the damage" (para 22). Lord Hutton offered a similar analysis, but in terms of "risks" rather than "agents" (para 118). Lord Rodger offered a more detailed analysis bridging the language of "risks" and "agents": "the claimant must prove that his injury was caused by the eventuation of the kind of risk created by the defendant's wrongdoing. ...read more.

Further, as we have set out above, the House of Lords defined those limited circumstances narrowly. Consequently, unless a future court relaxes these limits, then - with the exception of the backlog of other mesothelioma claims - the Fairchild decision will only affect a tiny proportion of the tort claims that come before the courts each year. Would a decision in favour of the defendants have been "deeply offensive to instinctive notions of what justice requires and fairness demands"? In our opinion the answer to this question depends on whether one considers tort law as the only method of achieving justice and fairness. We share the sense that it would be grossly unfair if those suffering from mesothelioma were left without medical and financial support. But we are less convinced than Lord Nicholls that it is just to make the few employers who are still in business liable in tort for the full cost of the problem (although we accept that the intricacies of employers' liability insurance mean that the employers will not themselves pick up the bill). We think that a lot could be said in favour of a legislative solution involving a compensation package funded by those industries (mainly the construction industry) which exposed employees to asbestos, those insurers who offered cover against the risks and by the State. Such a package would have the advantages that it could cover victims of mesothelioma who can identify no solvent former employers (including victims of environmental asbestos, such as those living near production facilities, and victims who cannot establish where they were subjected to asbestos), and could be put in place without any distortion of ordinary tort law. It would also avoid some of the costs and delays involved in adversarial legal claims. But the House of Lords clearly had no power to impose a legislative solution. Instead the House of Lords did what it could. And it seems to be widely thought that Fairchild is "a victory for justice and fairness" (as 92 MPs claimed in an Early Day Motion on 16 May). ...read more.