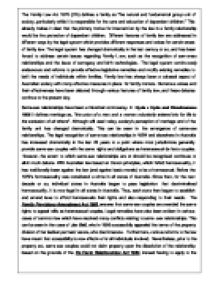 Family Law in Australia. The legal system has changed dramatically in the last century or so, and has been forced to address certain issues regarding Family Law; such as the recognition of same-sex relationships and the issue of surrogacy and birth techno

The Family Law Act 1975 (Cth) defines a family as "the natural and fundamental group unit of society, particularly while it is responsible for the care and education of dependent children." This already makes it clear that the primary motive for intervention by the law in a family relationship would be the protection of dependent children. Different features of family law are addressed in different ways by the legal system which provides different responses and values for certain areas of family law. The legal system has changed dramatically in the last century or so, and has been forced to address certain issues regarding Family Law; such as the recognition of same-sex relationships and the issue of surrogacy and birth technologies. The legal system continuously endeavours and reforms to provide effective legislative remedies and modify existing remedies to befit the needs of individuals within families. Family law has always been a colossal aspect of Australian society with many effective measures in place for family matters. Numerous values and their effectiveness have been debated through various features of family law, and these debates continue to the present day. ...read more.

He also argued that because the law discriminated against homosexuals on the basis of their sexuality, it violated Article 26. It can be argued that the failure of the legal system to accommodate for gay and lesbian marriages is a violation of a person's human rights under the Universal Declaration of Human Rights 1948, which states "Men and women of full age, without any limitation due to race, nationality or religion, have the right to marry and to found a family". The Australian government, by prohibiting gay marriages is failing to adequately protect the rights of its citizens and also provide to the needs of individuals. Furthermore, the article "Commonwealth quashes ACT in battle over civil union laws" featured in the SMH in 2006, shows the extent to which the law is effective for society in meeting community standards and expectations. It was an expectation in Australia at this time, and continues to be so, that the law does not allow the marriage of homosexual couples. Although this Civil Unions Act 2006 (ACT) attempted to bypass Federal Law making power in regards to marriage, it was unsuccessful in creating the concept of the 'civil union'. ...read more.

The law can be seen as ineffective in its treatment of children born via alternative birth technologies such as surrogacy. In these cases, the law stands that the woman who gave birth to the child is legally the mother. This is particularly important in cases like re Evelyn (1998) and the ineffectiveness of the law in reflecting community standards and also responding to the needs of individuals is evident when cases like this are discussed. In conclusion, there are many legal family issues within Australia's contemporary society, each being dealt with delicacy to ensure justice for all. The legal system is required to ensure that its laws are effective and correspond with the continually changing society, as in the case of the family law system, if it is to achieve fair and just outcomes every time. Same sex couples are one area the development of the law can be traced accurately. There has been much development in same sex relationship laws, and much has changed over time regarding this group. However, the law has not yet gone as far as to grant them the marriage rights. Furthermore, advance in birth technology have created a great need for law reform. When considering the new laws in this area, both parliaments and the courts need to address a multitude of conflicting ethical views. ...read more.