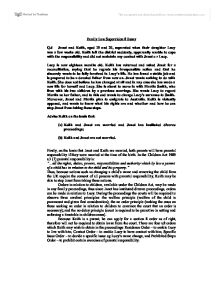 Family Law Supervision 8 Essay Q.6 Janet and Keith, aged 19 and 20, separated when their daughter Lucy was a few weeks old. Keith left the district suddenly, apparently unable to cope with the responsibility and did not maintain any contact with Janet or Lucy. Lucy is now eighteen months old. Keith has returned and asked Janet for a reconciliation, saying that he regrets his irresponsible action and that he sincerely wants to be fully involved in Lucy's life. He has found a stable job and is prepared to be a devoted father from now on. Janet wants nothing to do with Keith. She does not believe he has changed at all and in any case she has made a new life for herself and Lucy. She is about to move in with Martin Smith, who lives with his two children by a previous marriage. She wants Lucy to regard Martin as her father, and to this end wants to change Lucy's surname to Smith. Moreover, Janet and Martin plan to emigrate to Australia. Keith is violently opposed, and wants to know what his rights are and whether and how he can stop Janet from taking these steps. Advise Keith on the basis that: (a) Keith and Janet are married and Janet has instituted divorce proceedings; (b) ...read more.

'the likely effect on him of any change in his circumstances'. When looking at these factors, it is obvious that forcing Lucy to live with Keith would not be appropriate as she has no connection with him yet. It could also be argued, as in the case of Brixey v. Lynas that Lucy needs to stay with her mother. The court in this case gave very strong weight to the proposition that a very young child needs to be with its mother and based this on common knowledge. This is similar to Lucy because Lucy has been with her mother since birth and so it would not be in her best interests to split them. However, there is increasing judicial enthusiasm for shared residence orders. Looking at the case of D v. D the court granted a shared residence order even though the mother and father were living in different jurisdictions. In relation to a Contact Order, there will be a strong presumption that Lucy should have contact with her father as this is generally recognised as being in the best interests if the child in the great majority of cases. Applying Re R (minor) (contact: biological father) Keith will have a very strong chance of being granted a Contact Order. In this case the child had been brought up to believe that the mother's partner was the natural father and had actually not seen the real father for 3 years (less time than Lucy's situation) ...read more.