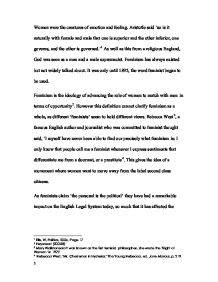 Feminism in the UK. As feminists claim the personal is the political they have had a remarkable impact on the English Legal System today, so much that it has affected the world as a whole. Various aspects of English law like criminal law,

Women were the creatures of emotion and feeling. Aristotle said 'so is it naturally with female and male that one is superior and the other inferior, one governs, and the other is governed.'1 As well as this from a religious England, God was seen as a man and a male supremacist. Feminism has always existed but not widely talked about. It was only until 1895, the word feminist began to be used. Feminism is the ideology of advancing the role of women to match with men in terms of opportunity2. However this definition cannot clarify feminism as a whole, as different 'feminists' seem to hold different views. Rebecca West3, a famous English author and journalist who was committed to feminist thought said, 'I myself have never been able to find our precisely what feminism is: I only know that people call me a feminist whenever I express sentiments that differentiate me from a doormat, or a prostitute4. This gives the idea of a movement where women want to move away from the label second class citizens. As feminists claim 'the personal is the political' they have had a remarkable impact on the English Legal System today, so much that it has affected the world as a whole. Various aspects of English law like criminal law, family law5, property law, rape and domestic violence have been configured to suit women's necessities as well. 'In recent years, for example, both English and American courts have abandoned the common law principle that a husband cannot be prosecuted for raping his wife, despite her refusal to consent to sexual intercourse. The wife was deemed by the fact of marriage to have consented'6. It is focused on helping individual women reach for their goals by removing any barriers that stop them from being part of every opportunity7. The case of Bradley v Illinois8 is an early case that challenged sexual discrimination, through the case it is noticeable that the courts counter women's rights.9 My focus is on the liberal feminist theory, the moderate face of feminism. ...read more.

These are a few of the many rights it provides for women31. Secondly the Equal pay act was passed due to the reasons of gender imbalances but this was only because of the Ford sewing machinists' strike of 196832, this is an example of how far women had to go in order to protect their rights.33 The abortion debate is still current even though it was legalised in 196734 on the influence of feminists that they have a right to control their body and what comes of it. From feminists for life 'We believe in a woman's right to control her body, and she deserves this right no matter where she lives, even if she's still living inside her mother's womb'. Some feminists oppose this because they are inconsistent with the core feminist principles of justice and non-discrimination. Some argue that abortion does not liberate women, but allows society not to cater to women's needs.35 36 20th century feminists saw it as a male plot: they regarded it as a way for men to have sex with women in order to prevent a child being born.37 Instead of being seen as merely formal changes by Liberal Feminists, they were only made so because of relentless campaigning. In 1994 the Marital Rape Act was passed, this act to prosecute those who rape their partners was due to the countless protests by Liberal Feminists.38 Women were now represented like first class 'citizens'. Coming to the 1960's, an era known as the second wave of feminism was a part of society where everyone was aiming for the stars. The woman barrier did not exist (on a social level). Women's rights and roles and dreams were not laughed at but rather shared with.39 As well as this some chose to become prostitutes40. Liberal Feminists are for this idea as they see it as a business transaction between two individuals and that it is a woman freedom of choice. ...read more.

The women made car seat covers and as stock ran out the strike eventually resulted in a halt to all car production. 33 Roberts v Hopwood [1925] AC 578 34 (2004). Roe v Wade: Key US abortion ruling. Available: http://news.bbc.co.uk/1/hi/world/americas/49315.stm. Last accessed 01/12/2011. 35 There are women who are raped and become pregnant; the problem is that they were raped, not that they are pregnant. There are women who are starving who become pregnant; the problem is that they are starving, not that they are pregnant. There are women in abusive relationships who become pregnant; the problem is that they are in abusive relationships, not that they are pregnant. Megan Clancy 36 Nat Hentoff. (1994). Yes, There Are Pro-Life Feminists. Available: http://groups.csail.mit.edu/mac/users/rauch/nvp/consistent/hentoff_feminist.html. Last accessed 01/12/2011 37 Andrea Dworkin. (1983). Abortion. Available: http://www.nostatusquo.com/ACLU/dworkin/RightWingWomenAbortion.html. Last accessed 01/12/2011. 38 "R v R[1991] UKHL 12" 39 Women were involved in Art, Sports and Music 40 This is seen as a gruesome act by many religions and nations. 41 Jennifer Roback Morse, herself a libertarian feminist, admits: "I think it is well to admit ... that our inattention to family life and community responsibility has left libertarians open to the charge that we do not care very much about these matters" (Morse 2001, 28). Responses to this concern include Morse's own attempt to develop a libertarian political theory capable of taking "account of infant helplessness" (Morse 2001, 28). 42 Del Monte Foods v Mundon [1980] ICR 694 43 But as third wave feminism is having negative impacts it maybe a time for a fourth where women attempt to remove the subjugation of being seen as objects 44 Carol guilligan has developed the argument of a different approach to deciding on case law where men have the apperoach for justice and women have it for care, Gilligan, Carol, 1982. In a Different Voice: Psychological Theory and Women's Development, Cambridge: Harvard University. 45 Feminist Judgments: From Theory to Practice 46 Bridget J. Crawford. (2010). The third wave's break from feminism. Int. J.L.C. 2010, 6(1), 100-102. ?? ?? ?? ?? 1 ...read more.