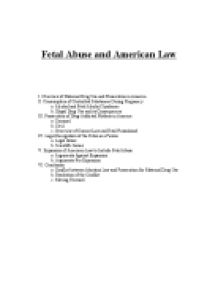 ﻿Fetal Abuse and American Law I. Overview of Maternal Drug Use and Prosecution in America II. Consumption of Controlled Substances During Pregnancy a. Alcohol and Fetal Alcohol Syndrome b. Illegal Drug Use and its Consequences III. Prosecution of Drug-Addicted Mothers in America a. Criminal b. Civil c. Overview of Current Law and Fetal Personhood IV. Legal Recognition of the Fetus as a Person a. Legal Issues b. Scientific Issues V. Expansion of American Law to Include Fetal Abuse a. Arguments Against Expansion b. Arguments For Expansion VI. Conclusion a. Conflict between Abortion Law and Prosecution for Maternal Drug Use b. Resolution of the Conflict c. Moving Forward I. Overview of Maternal Prosecution and Maternal Drug Use in America In response to the crack-cocaine epidemic of the late 1980?s, prosecutors throughout the United States began charging women who consumed cocaine during their pregnancies with crimes such as delivering drugs to a minor and child endangerment.[1] As time has passed, these prosecutions have continued to occur at an ever-increasing pace.[2] Women are now receiving twenty-year prison sentences and being charged with crimes child abuse to murder.[3] In modern times, such prosecutions are unique to the United States alone, where women are committed and prosecuted based on their actions while pregnant.[4] This drive to protect the fetus from harm, and giving the fetus the same protections as living and breathing human beings is in direct conflict with the American understanding of tort law and the American history of abortion law. One might also find conflict between this desire to protect the unborn and the American political refusal to provide guaranteed healthcare, effective education, and necessary social supports to those in need. Further out of line with American law is the direct discriminatory effect of such prosecutions, as the overwhelming majority of women prosecuted are women of color and women in poverty.[5] Five percent of all American women consume illegal drugs during their pregnancy, and twenty-five percent of all American women consume alcohol during their pregnancy.[6] These ...read more.

Another legal concern is whether the prosecutions of pregnant mothers who consume drugs pass the Court?s test of intermediate scrutiny when considering cases of equal protection based upon gender discrimination? To pass intermediate scrutiny, it must be shown that the challenged law furthers an important government interest in a way that is substantially related to that interest.[101] The courts have already held that the State holds a significant interest in the preservation of the life and health of its citizens, including the potential life of its citizens.[102] What remains to be answered is whether the prosecution of pregnant women who ingest substances which cause harm to their unborn fetus is substantially related to protecting the life and health of its citizens. Knowing that the unborn child will become a citizen upon birth,[103] it is possible to conclude that protecting the health of the fetus is equivalent to protecting the life of a citizen. Also, in conjunction with the holding of Planned Parenthood v. Casey,[104] an analysis must be undertaken concerning whether such laws and prosecutions would create an undue burden on the pregnant woman by restricting her from the ability to do to her own body as she desires. However, it is clear that the use of illegal drugs is against public policy,[105] and the laws already in existence that prohibit the consumption of controlled substances would likely decide this question with ease: the consumption of illegal drugs is not a protected liberty interest. b. Scientific Issues Although many scientific studies suggest that the use of some controlled substances cause permanent and irreparable damage to the fetus,[106] many studies also suggest that such fetal harm may be greatly reduced after birth and as the child matures.[107] Therefore, it may be a safe conclusion that different substances effect the unborn fetus in different ways, and even when pregnant women consume the same substance, the effects upon the fetus may be highly variable based on multiple other factors, such as nutrition and access to prenatal care. ...read more.