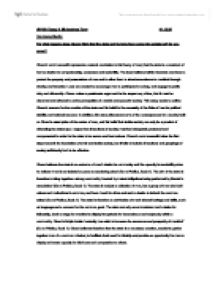 For what reasons does Cicero think that the state and its laws have come into existence? Do you agree?

GV100: Essay 2: Michaelmas Term 01.12.05 Courtenay Mavity For what reasons does Cicero think that the state and its laws have come into existence? Do you agree? Cicero's commonwealth represents a natural conclusion to his theory of man; that the state is a construct of human desire for companionship, consensus and sociability. The laws instituted within that state are there to protect the property and possessions of men and to allow them to show benevolence to mankind through sharing and donation. Laws are created to encourage men to participate in society, and engage in public duty and citizenship. Cicero makes a passionate argument for the supremacy of law, that it must be observed and adhered to as the prerequisite of a stable and peaceful society. This essay seeks to outline Cicero's reasons for the creation of the state and his belief in the necessity of the Rule of Law for political stability and national success. In addition, this essay discusses some of the consequences for a society built on Cicero's assumption of the nature of man, and his belief that stable society can only be a product of defending the status-quo. I argue that all sections of society must feel adequately protected and compensated in order for the state to be secure and harmonious. Cicero's commonwealth takes the first steps towards the foundation of a fair and stable society, but it fails to include all sections and groupings of society sufficiently for it to be effective. Cicero believes the state is an outcome of man's desire for community and his capacity for sociability when he reflects 'man is not isolated or prone to wandering alone' (De re Publica, Book 1). ...read more.

Law is therefore firstly a solution to civil volatility; it is the ultimate authority and framework for behavior and action. The second reason is that for Cicero, law holds the answer to difficult questions arising from man's nature, such as 'what is justice?' and, 'if and how in what sense men can be equal?' Law provides a tonic to this question because despite Cicero's belief that men hold innate qualities in common, he does not think this causes all men to be equal. On the contrary, each man is unique, possessing different skills, aptitudes and advantages over the other. Each man may only be happy when he pursues his skill and is secure in his own order. Law has no role in seeking to equalise man's differences, but it can provide security to each man in his rightful order. Equity is established through the law of the commonwealth, so that each is permitted in law to possess his own, despite the amount of what is one's own differing from one person to the next. Cicero's narrator Scipio proclaims, 'the peculiar concern of a state and city is that every person's custody of his own property be free and undisturbed' (De re Publica, Book 4). Law provides the answer for Cicero to the question, 'what is justice?' Justice is not equality, but proportionality and equity, protected in law. Establishing the Rule of Law and the recognition of the state as a platform for debate on issues of the common good is based on the assumption that mankind is innately virtuous, that concern spans both self-interest and collective interest. ...read more.

If we contest this view, and suggest man is more concerned for himself than his community, we begin to encounter problems. We see that although a mixed constitution stands the best chance of accommodating each man's desire, it is necessary that the constitution has enough strength to include all sections as representatively as possible. Cicero recognises 'it is possible to have one senate and one people, and if we don't we are in very deep trouble' (De re Publica, Book 1). The strength of a mixed constitution is that it is holistic, involving everyone. A mixed constitution that pays only lip-service to some parts, whilst favouring established elites, will not function effectively or thrive in the long-term. If man is by nature not as virtuous as Cicero assumes, those who hold the greatest power can potentially exploit the constitution to their own advantage. Although Cicero argues that 'no just ruler would implement laws he himself would not obey', opportunities are limited for weaker sections of society to participate in politics and prevent such injustice from happening. Cicero's constitution fails to address inequality in any sense; rather it compounds it, based on one assumption: lower classes desire freedom from oppression rather than a renegotiation of society's structure. Cicero in affect offers the less fortunate a worthless social contract. I believe that rather than a fellowship of equals, this is an unequal society with power consolidated at the top. Cicero's vision constitutes a weak consensus government that could certainly not exist today, as it conflicts with our more egalitarian social values and beliefs. Because the commonwealth can only function by dividing society between those who have the protection of the law and those with nothing to protect and little expectation of social mobility, there is neither hope of social cohesion nor the stability Cicero's theory envisages. ...read more.