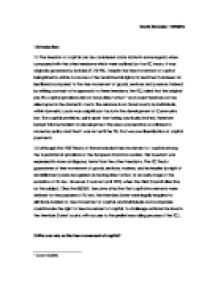 David McCabe 11090596 1 Introduction: 1.1 The freedom of capital can be considered a late starter in some regard, when compared with the other freedoms which were outlined by the EC treaty. It was originally governed by Articles 67-73 EEC. Despite the free movement of capital being listed in Article 14 as one of the fundamental rights, its treatment has been far less liberal compared to the free movement of goods, services and persons. Indeed, by striking contrast to its approach to these freedoms, the ECJ ruled that the original pre-TEU capital provisions did not have direct effect1 and could therefore not be relied upon in the domestic courts. The reliance in national courts, by individuals, within domestic courts was a significant factor in the development of Community law. The capital provisions, quite apart from being cautiously drafted, therefore lacked this mechanism for development. The area was sensitive and linked to monetary policy and thus it was not until the TEU that we saw liberalisation of capital payments. 1.2 Although the 1957 Treaty of Rome included free movement of capital among the foundational provisions of the European Common Market, this freedom was expressed in more ambiguous terms than the other freedoms. The EC Treaty guarantees of free movement of goods, services, workers, and enterprise (or right of establishment) were recognized as having direct effect at an early stage of the evolution of EU law. However, it was not until 1990, when the third Council directive on the subject, Directive 88/361, became effective that capital movements were defined for the purposes of EU law, the Member States were legally required to eliminate barriers to free movement of capital, and individuals and companies could invoke the right to free movement of capital to challenge national tax laws in the Member States' courts, with access to the preliminary ruling process of the ECJ. 2 Who can rely on the free movement of capital? ...read more.

In any event, any rule falling within any of the above exceptions cannot constitute a means of arbitrary discrimination or disguised restriction on the free movement of capital or payments. 7.7 The ECJ has reaffirmed that derogations cannot be applied so as to serve purely economic ends21. As with the other exceptions to Treaty freedoms, it would seem that the crucial question will be that of 'was it proportionate', whether the Member State is seeking to justify its measure under the express treaty derogations or using a rule of reason style argument. 8 Rule of reason? 8.1 Article 56 does not just catch those rules which discriminate directly against capital movements; it also catches rules which indirectly restrict capital movements. With a restriction based test it seems that member states may be able to rely on grounds of overriding public interest to justify a national measure. In Reisch22 the Court, referring to previous case law in Konle23, summarised its position as follows: 'it is not in dispute that those measures, by laying down a procedure of prior notification/authorisation for the acquisition of immoveable property, restrict the free movement of capital, by their very purpose, the free movement of capital. Such restrictions may nevertheless be permitted if the national rules pursue, in a non-discriminatory way, an objective in the public interest and if they observe the principle of proportionality that is if the same result could not be achieved by other less restrictive measures.' Thus in Konle, town and county planning have been accepted as an appropriate overriding requirement in the general interest and similarly environmental protection and land management concerns have been recognised. Other grounds have been objectives connected with public housing policy24, agricultural and forestry holdings25, preservation of jobs in such holdings in cases of inheritance26 or the objective of maintaining or promoting the use of an official language.27. Economic grounds cannot afford a valid justification28 8.2 There is some lack of clarity around whether a national rule is discriminatory or not. ...read more.