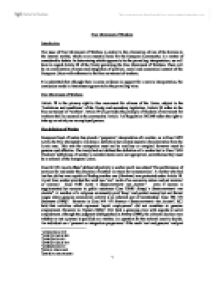 Free Movement of Workers Introduction The issue of Free Movement of Workers is central to the elimination of one of the barriers to the internal market, which as an essential basis for the European Community, is a matter of considerable debate. In determining which appears to be the prevailing interpretation, we will have to regard Article 39 of the Treaty governing the Free Movement of Workers. There will be an examination of cases and integration of political, social and economical context of the European Union with reference to the free movement of workers. It is submitted that although there is some evidence in support for a narrow interpretation, the conclusion made in Antonissen appears to be the prevailing view. Free Movement of Workers Article 18 is the primary right to free movement for citizens of the Union, subject to the 'limitations and conditions' of the Treaty and secondary legislation. Article 39 refers to the free movement of 'workers'. Article 39 (1) provides the principle of freedom of movement for workers shall be secured in the community. Article 1 of Regulation 1612/68 refers the right to take up an activity as an employed person. ...read more.

However in Commission v Belgium10, ECJ held that three months was also reasonable, provided it can be extended if the work seeker has genuine chances to do so. It has been clarified that work seekers are entitled to entry of another member state. But ECJ has confirmed that work seekers have limited rights of residence and will not have the benefits that full worker status has. The current legislation continues to require an economic element either direct or indirect. The economic element for non workers lies in the fact that the citizens of the Union have a right to move freely, only if they do not require social assistance from the host member state. Oliveira (2002)11 points out it is still very much dependent on the enjoyment of 'a degree of financial self-sufficiency' in other words carrying out an economic activity or being in possession of sufficient resources. The court is not willing to impose on Member State the duty to finance the integration in its labour market for unemployed EU citizens. Account must be taken of considerations such as length of residence on territory, age, health, economic situation, social and cultural links integration and links with country of origin (Cases C- 482/01 and C-493/01 Orfanopoulos and Oliveri v Land Berlin-W�rttemburg, judgment of 29 April 2004). ...read more.

this was the case in Antonissen, however in Bouchereau15 the freedom of movement of workers was refused because it was held that he had convictions which was a genuine threat to society. Conclusion It seems that the right to enter a Member State in search for work is available to all EC citizens. The ECJ has interpreted Article 39 wide; the narrow interpretation of Article 39 (3) refers to free movement of workers to 'offers of employment actually made'. However since the ruling in Royer and further in Antonissen has created the right to enter a Member State in search for work, broad fundamental rights has derived from the Treaty itself (Article 39). The EC citizen who entered the territory of another member state in order to seek employment shall not be expelled for as long as the EC citizen can provide evidence that they have genuine chances of finding a job (article 14 (4). So the status of a job seeker is recognised by directive 2004/38 but duration of that right is not measured in years or months. It is submitted that although there is some evidence in support for a narrow interpretation, the conclusion made in Antonissen appears to be the prevailing view. ...read more.