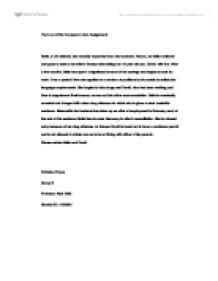 The Law of the European Union Assignment Bella, a UK national, has recently separated from her husband, Alonso, an Italian national and gone to seek a new life in Greece after taking her 15 year old son, David, with her. After a few months, Bella has spent a significant amount of her savings and begins to look for work. Over a period f time she applies for a number of positions but is unable to satisfy the language requirements. She begins to take drugs and David, who has been working part time to supplement their income, moves out into other accommodation. Bella is eventually arrested and charged with minor drug offences for which she is given a short custodial sentence. Meanwhile her husband has taken up an offer of employment in Germany and, at the end of the sentence Bella tries to enter Germany to effect reconciliation. She is refused entry because of her drug offences. In Greece David is found not to have a residence permit and is not allowed to obtain one as he is not living with either of his parents. Please advise Bella and David. Nicholas Payne Group B Professor Nick Grief Student ID: 4150081 The scenario above involves one of the fundamental four freedoms of European law; the free movement of persons Arts. 39-42 of the EC Treaty provide that citizens of EU member states shall have the general right to move freely within the EU to seek and take up offers of employment. ...read more.

This states that a Union citizen shall have the right of residence for a period of up to 3 months without any conditions or formalities other than the necessity, like in article 5, to simply hold a passport or valid ID card. However there are restrictions under Article 14: retention of residence9, which can refuse residence if a citizen becomes an unreasonable burden upon the social assistance system of the state. One must question the nature of Bella's offence and in particular look to the word 'minor' however this is a matter of national law discretion. In UK law the immigration policy of those with previous convictions is that 'refusal of leave of entry should normally follow unless admission is justified for strongly compassionate reasons'10 The European Commission have clarified their position on this by explicitly stating that 'Previous criminal convictions in themselves do not constitute grounds for restricting the right to move and reside freely.'11 They feel that expulsion is a very harsh interference with a person's life. However it all relies on a matter of public policy within the German legal framework as the case of Commission v Spain12 highlights as E.U law 'enables member states to prohibit nationals of other member states or their spouses who are national of third countries from entering their territory on grounds of public policy.'13 If Germany have in fact achieved what the Treaties set out to do by forming common policies with ...read more.