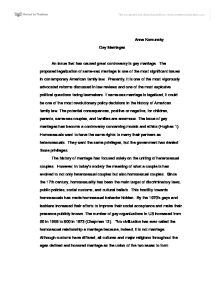 Anna Korsunsky Gay Marriages An issue that has caused great controversy is gay marriage. The proposed legalization of same-sex marriage is one of the most significant issues in contemporary American family law. Presently, it is one of the most vigorously advocated reforms discussed in law reviews and one of the most explosive political questions facing lawmakers. If same-sex marriage is legalized, it could be one of the most revolutionary policy decisions in the history of American family law. The potential consequences, positive or negative, for children, parents, same-sex couples, and families are enormous. The issue of gay marriages has become a controversy concerning morals and ethics (Hughes 1). Homosexuals want to have the same rights to marry their partners as heterosexuals. They want the same privileges, but the government has denied those privileges. The history of marriage has focused solely on the uniting of heterosexual couples. However, in today's society the meaning of what a couple is has evolved to not only heterosexual couples but also homosexual couples. Since the 17th century, homosexuality has been the main target of discriminatory laws, public policies, social customs, and cultural beliefs. This hostility towards homosexuals has made homosexual behavior hidden. By the 1970's gays and lesbians increased their efforts to improve their social acceptance and make their presence publicly known. The number of gay organizations in US increased from 50 in 1969 to 800 in 1973 (Chapman 12). ...read more.

The final reason against gay marriages is that marriage benefits cost money. Legalizing same-sex marriage would place more burden on the federal treasury because couples could become eligible for federal benefits and tax breaks. Taxpayers would then be supporting a lifestyle they disapprove of. ("Citizen's Toolbox" 2). There can be several alternative solutions for gay marriages. One solution could be for the government to allow same-sex marriages and recognize gay marriages as a unity between two human beings without discriminating against them. A positive consequence of this solution would be that gays would enjoy the same rights as heterosexual couples and would be able to share the same benefits provided by the government to heterosexuals. It would also help society accept them more. A negative consequence of this solution would be that it sets a bad example for children because many parents would be telling their kids its wrong and it goes against tradition. Kids would be confused on whether or not it is right or wrong, but be forced to accept that it is right because the government allows it. Another solution is to not allow people of the same sex to marry, but promote adoption. A positive consequence of this solution would be that it would unite the couples and give them the privilege of having kids. It would also help homeless kids and provide them with a home and two people that would care for them. ...read more.

The fact is that kids do not receive any less love from gay couples, so the issue of raising children should not affect the reason of whether or not to legalize gay marriages. Homosexual marriages are beneficial because it gives them marriage benefits. It also creates stability and promotes acceptance in both heterosexual and homosexual communities. The final point is that homosexuals should have the same basic rights as all other people including civil marriage. This alternative could be carried out the federal government. It could grant that all states accept the marriage between two people of the same sex. That would prohibit any state from denying same-sex marriages. This way homosexual couples could marry and be legally recognized as married and enjoy the same benefits as any other married couple. Then all states would acknowledge the government's decision and there would be no more court cases concerning gay marriages and all the states would equally have to accept the government's decision. Afterwards, the states could set up there own rules concerning age and requirements needed for gay marriage just like in heterosexual marriages, where there are age restrictions. The gay community is not a threat to society, and by granting them legal marriage licenses would make society better understand gay relationships and the acceptance of the gay community. The government in this case, would be making the point that gays are as equal to any other person and therefore deserve the same rights. ...read more.