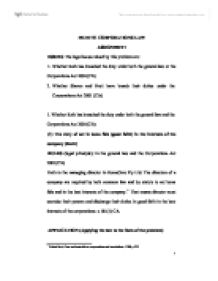 meanwhile, executive directors may breach their duties to the company if they work for a rival business in their spare time, using skills and knowledge that assists the rival business to compete with the employer company. (Hivac Ltd v Park Royal Scientific Instruments Ltd16) VitaHerb Ltd is an unlisted company selling over-the-counter herbal treatments for small domestic pets. HorseCare Pty Ltd is selling Kel's herbal treatment in domestic market and oversea market. Because these two companies are all focus on herbal treatment, the competitive relationship does exist. Kath, as the managing director of VitaHerb Ltd shouldn't work for any other competing companies in both normal working hours and spare time. Meanwhile, Kath shouldn't use her skills and knowledge to assist the rival business to compete with VitaHerb. However, she registered the competitive company-HorseCare Pty Ltd with Kel and placed themselves as the only shareholders and directors. In addition, because Kel has no business experience, it's likely that Kath did the main work in operating the company. For this reason, it may be ratiocinated that Kath works not only in the working hours but also in spare hours for HorseCare by using her skills and knowledge. The principle that a person can be a director of two competing companies does not apply to executive directors. They are unable to join the boards of competing companies. Kath, as the board members of VitaHerb, shouldn't join other competing companies. However, she has registered another company with Kel and joined the board of HorseCare. ARGUMENT Kath will argue that VitaHerb and HorseCare are not competing companies. first of all, VitaHerb focus on the domestic pet market including horse, however, HorseCare just focus on horse. Secondly, VitaHerb just focus on the domestic market, whereas, HorseCare focus on native and overseas markets. They can't become virtual competition. Above all, she can be the director in HorseCare. Sharon and Brett will argue that these two companies are all focus on the herbal treatment, in another words, the main product of two companies are the same-herbal treatment. ...read more.