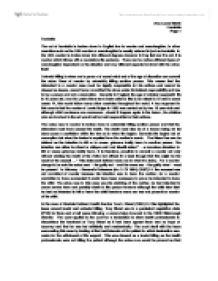 Homicide. Unlawful killing is when and a person of sound mind and of the age of discretion can commit the actus Reus of murder by unlawfully killing another person. This means that the defendant in a murder case must be legally responsible for his actions

Homicide The act of homicide is broken down in English law to murder and manslaughter, in other countries such as the USA murder or manslaughter is usually referred to just as homicide. In the USA murder is broken down into different degrees however in English law it is not, it is murder which follows with a mandatory life sentence. There can be various different types of manslaughter dependent on the situation and very different aspects involved with the crime itself. Unlawful killing is when and a person of sound mind and of the age of discretion can commit the actus Reus of murder by unlawfully killing another person. This means that the defendant in a murder case must be legally responsible for his actions and cannot be classed as insane, cannot have committed the crime under diminished responsibility and has to be a person and not a corporation. Currently in England the age of criminal responsibility is 10 years old, over the years there have been calls for this to be raised to 12 and in some cases 14, this would follow many other countries throughout the world. ...read more.

It was held that the doctor's decision not to operate on was reasonable as the head injuries incurred in the attack were the significant cause of the victim's demise. The defendant was rightly convicted of manslaughter as in criminal cases the blame cannot be apportioned. The defendants act doesn't need to the sole or man cause of death, it is sufficient that their acts significantly contributed to the demise of the victim. When a person unlawfully kills someone it is automatically classed as murder, however the charge can be reduced to manslaughter on various different grounds. Diminished responsibility and provocation are two grounds used when attempting to have a charge reduced to manslaughter. The Coroners and Justice Act 2009 replaced S.2 of the Homicide Act 1957 by stating "A person who kills or is party to the killing of another is not to be convicted of murder if D was suffering from an abnormality of mental functioning"2 this then was broken down into different parts; firstly if the defendants actions arose from a recognised medical condition3; the abnormality of mental functioning substantially impaired D's ability to do one or more things mentioned in sub section [1A]4 and provides an explanation for the defendants acts and omissions in doing or being party to the killing. ...read more.

original trial but the court of appeal admitted the evidence which was that the defendant had suffered years of abuse from her husband eventually suffering from battered woman's syndrome, which is also referred to as post traumatic stress disorder. The syndrome is recognised by the courts as the constant abuse the women incur can lead to sudden temporary loss of self control and can be seen to amount to diminished responsibility. So providing the defendant is able to establish and prove they were suffering from a total loss of self control or diminished responsibility could be proved then the charge can be reduced to voluntary manslaughter. Homicide is a broad term which is generally why it isn't a word normally associated with the English Legal System. We have it broken down into different sections to make it clearer and easier for all concerned to understand the differences between the indictments and the punishments that are involved as well as breaking down what has to be involved on each individual basis. One thing is certain, for a murder charge to stick the defendant must have no excuse for killing the victim, the actus reus and mens rea must fully be present in the case for the conviction to be safe. ...read more.

A fine essay. A tighter writing style will improve this essay.