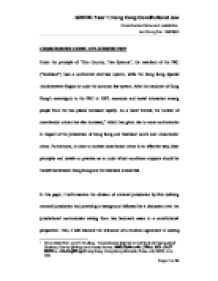 Hong Kong Constitutional Law - in order to combat cross-border crime in an effective way, clear principles and details on practice as to under which conditions suspects should be transferred between Hong Kong and the Mainland is essential.

CROSS-BORDER CRIME AND JURISDICTION Under the principle of "One Country, Two Systems", the mainland of the PRC ("Mainland") uses a continental civil law system, while the Hong Kong Special Administrative Region is under the common law system. After the handover of Hong Kong's sovereignty to the PRC in 1997, economic and social interaction among people from the two places increased rapidly. As a result thereof, the number of cross-border crimes has also increased,1 which has given rise to some controversies in respect of the jurisdiction of Hong Kong and Mainland courts over cross-border crime. Furthermore, in order to combat cross-border crime in an effective way, clear principles and details on practice as to under which conditions suspects should be transferred between Hong Kong and the Mainland is essential. In this paper, I will examine the division of criminal jurisdiction by first defining criminal jurisdiction and providing a background followed by a discussion over the jurisdictional controversies arising from two landmark cases in a constitutional perspective. Then, I will examine the relevance of a rendition agreement in solving these controversies and the principles in deciding jurisdiction between Hong Kong and the Mainland over cross-border cases. Lastly, I will explore the difficulties in reaching a formal rendition agreement between Hong Kong and the PRC. Criminal Jurisdiction In general, criminal jurisdiction refers to the right of a sovereign state to prosecute, try and punish a crime that occurs within its sovereignty.2 In defining the scope of criminal jurisdiction, there are four basic factors to take into consideration. They are: (i) the place where the crime was committed; (ii) the nature of the person who commited the crime; (iii) the nature of the victim of the crime; and (iv) the nature of the crime.3 These factors derive different principles of criminal jurisdiction4 namely, the territorial principle, the nationality principle, the passive personality principle, the protective principle and the universality principle.5 All these principles except the territorial principle are principles for the application of extraterritorial jurisdiction.6 Hong Kong applies mainly the territorial principle in exercising its criminal jurisdiction. ...read more.

If this principle is to be included from the agreement, Mainland felony offenders may treat Hong Kong as a haven to avoid the death penalty and take advantage from the loopholes of differences between the laws of the two jurisdictions.98 Nevertheless, if this principle is to be excluded from the rendition agreement between Hong Kong and China, unless special provisions were made for the waiver of the death penalty, it may put Hong Kong in a situation of violating the ICCPR. Non-extradition of Political Offence Further, the principle of "Non-extradition of Political Offence" also creates difficulty for the formulation of a formal rendition agreement. This principle received international recognition as a general principle for rendition agreement.99The provisions in the FOO provides that no surrender shall be made if the request is for the handling of an offence which is of political character100 or the request is for the purpose of punishing one's political opinions.101 Although this principle is an internationally recognized one which has been adopted between Hong Kong and foreign countries, there are views expressed that considering the nature of one country, the exclusion of this principle is beneficial to the maintenance of China's sovereignty and political system.102 Nevertheless, there are views expressed that as the political system and the protection of political rights between the two places are different, in order to maintain the stability of Hong Kong's system and life style, this principle should be included in the agreement.103 In addition to the three principles mentioned above, other issues must be considered such as principle of protecting a fair trial, principle of double jeopardy as well as the review mechanism for any extradition requests.104 Further study on these issues need to be addressed in reaching a formal rendition agreement. Conclusion Regarding the issue of jurisdictional controversies arose from the cross border cases, after considered the different views from scholars, on one hand, it will appear that the provision in BL support a conclusion that the Mainland courts should not be conferred with jurisdiction over crime took place in Hong Kong by adopting the nationality principle. ...read more.