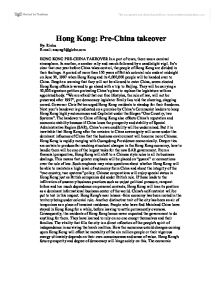 Hong Kong: Pre-China takeover By: Rinku E-mail: anurag5@globe.com HONG KONG PRE-CHINA TAKEOVER In a part of town, there was a carnival atmosphere. In another, a somber rally and march followed by a candlelight vigil. Its's clear that one year before China takes control, the people of Hong Kong are divided in their feelings. A period of more than 150 years of British colonial rule ends at midnight on June 30, 1997 when Hong Kong and its 6,000,000 people will be handed over to China. Despite a warning that they will not be allowed to enter China, seven elected Hong Kong officials vowed to go ahead with a trip to Beijing. They will be carrying a 50,000 signature petition protesting China's plans to replace the legislature with an appointed body. "We are afraid that our free lifestyles, the rule of law, will not be preserved after 1997", pro democracy legislator Emily Lau told the cheering, clapping crowd. ...read more.

Such emphasis may raise questions about whether Hong Kong will be able to maintain a high level of autonomy from China and about the integrity of the "one country, two systems" policy. Chinese corporations will enjoy special status in Hong Kong just as British companies did under British rule. If these leads to the infiltration of unsavory business practices such as unjust political pressure, rampant bribes and too much dependence on personal contacts; Hong Kong will lose its position as a dominant informational business center of the world. China's self-restraint will be put to test in this respect. Hong Kong's near laissez -faire economy has been rooted in the territory being under colonial rule. Another distinctive trait of the city has been an air of temporizes as a place of transient residence. People who have fled Mainland China have stayed in Hong Kong for a while, before leaving to settle permanently overseas. Consequently, the residents of Hong Kong hence never expected the government to do anything for them. ...read more.