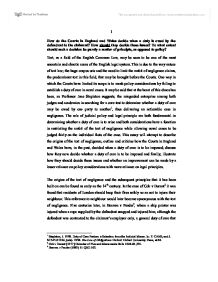 How do the Courts in England and Wales decide when a duty is owed by the defendant to the claimant? How should they decide these issues? To what extent should such a decision be purely a matter of principle, as opposed to policy?

How do the Courts in England and Wales decide when a duty is owed by the defendant to the claimant? How should they decide these issues? To what extent should such a decision be purely a matter of principle, as opposed to policy? Tort, as a field of the English Common Law, may be seen to be one of the most uncertain and chaotic areas of the English legal system. This is due to the very nature of tort law; the huge corpus uris and the need to limit the ambit of negligence claims, the predominant tort in this field, that may be brought before the Courts. One way in which the Courts have limited its scope is to mask policy considerations by failing to establish a duty of care in novel cases. It may be said that at the heart of this chaos has been, as Professor Jane Stapleton suggests, the misguided enterprise among both judges and academics in searching for a core test to determine whether a duty of care may be owed by one party to another1, thus delivering an actionable case in negligence. The role of judicial policy and legal principle are both fundamental in determining whether a duty of care is to arise and both considerations have a function in restricting the ambit of the tort of negligence while allowing novel cases to be judged fairly on the individual facts of the case. ...read more.

If affirmative then a prima facie duty of care arises and secondly, integrating policy considerations, if there is any valid reason why a duty of care should not be imposed? With the onus being on the defendant to prove a valid reason. If both the questions were answered satisfactory to the claimant then a duty of care was then imposed upon the defendant. It can be argued that this further liberalisation of the duty test could provide additional potential for extensive liability as the proximity criteria of the first stage could prove unlimited in scope as many injuries may be considered as foreseeable and there being no distinction between both terms. Further doubts of the "Anns test" were to follow, perhaps most noticeably in Yeun Kun Yeu v Attorney General of Hong Kong16 where he stated: "In view of the direction in which the law has since been developing, their Lordships consider that for the future it should be recognised that the two-stage test in Anns is not to be regarded as in all circumstances a suitable guide to the existence of a duty of care."17 The decision in Anns was later overruled in Murphy v Brentwood District Council18, where cracks appeared in a house built on a concrete raft which had subsided and the plaintiff sued the local authority for negligently approving the plans. This proved to be a contraction in the scope of a duty of care, and established that there was no duty in pure economic loss cases. ...read more.

An improvement may be found in adopting a similar codification, like our French cousins, legislated through parliament. Such a system would promote certainty as to when a legal duty would arise and fears of an over litigious society should be dispelled with a reliance on causation principles to limit the scope of liability. In conclusion, tort acts as a means of: loss distribution, risk allocation, deterrence and perhaps most importantly as a means of corrective justice when a party has suffered harm. Duty, breach of duty, causation and remoteness are all control methods but, duty, by being the first hurdle that a successful claimant must jump over, is the most effective way to mask the policy considerations made by judges in controlling the ambit of negligence. The courts by trying to, as Whitting suggests, predict the effect of newly established duty situations on future behaviour33 is unsatisfactory. Buckland argued that the duty concept is "an unnecessary fifth wheel on the coach, incapable of sound analysis and possibly productive of injustice."34 As society evolves, the tort of negligence with the various fields it incorporates must also evolve. The use of policy in doing this has limited the scope of new duty situations and could create injustice and has given the judiciary too much discretion in determining so called policy. If the courts were to rely solely on legal principle or precedent, new duty situations could arise incrementally and better help to create certainty in the law of tort. 2,486 Words. ...read more.