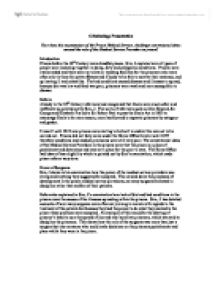 Criminology Presentation How does this examination of the Prison Medical Service, challenge conventional ideas around the role of the Medical Service Providers in prison? Introduction Prisons before the 19th Century were dreadful places. Sim, J explains how all types of people were locked up together in damp, dirty and unhygienic conditions. Prisons were overcrowded and there were no toilets or washing facilities for the prisoners who were often only in there for petty offenses and if lucky to be able to survive their sentence, end up leaving ill and unhealthy. The bad conditions caused diseases and illnesses to spread, because diet was low and food was poor, prisoners were weak and more susceptible to disease. ...read more.

The Home Office had ideas of less eligibility which is pointed out by Sim's examination, which made prison reform very slow. Power of Surgeons Sim, J shows in his examination how the power of the medical service providers was strong and anything they suggested be accepted. This slowed down the processes of development in the prison medical service provisions, as many surgeons believed in discipline rather than welfare of their patients. Reformists explained in Sim, J's examination how lack of diet and bad conditions in the prisons were the causes of the illnesses spreading within the prisons. Sim, J. has detailed accounts of how many surgeons were often very wrong in morals with regards to the treatment of the patients but because they had the power to do what they wanted in the prison these practices were accepted. ...read more.

"The journal continued to highlight the cases of particular doctors and their role in the prisons, especially when they failed to live up to or indeed undermined the good name of the medical practice." Sim, J (1990, pg. 24) Long sentences- solitary confinement Many prisoners would go into prison for a petty crime and become ill from the conditions therefore have to receive medical attention and often end up serving longer sentences due to surgeons claiming they were insane or being disobedient and the prisoner being punished by solitary confinement. This was a punishment that many Reformists explained in Sim's examination, said to be fatal. The dark cell was somewhere where prisoners may be kept for up to six days, which could be decided upon by the surgeon. ...read more.