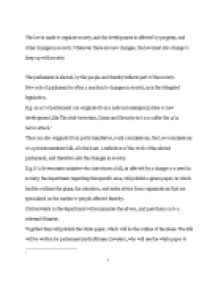 How Has The Law Adapted To Changes In Society With Regard To Marriage And Family?

﻿The law is made to regulate society, and the development is affected by progress, and other changes in society. Whenever there are new changes, the law must also change to keep up with society. The parliament is elected, by the people and thereby reflects part of the society. New acts of parliament is often a reaction to changes in society, as is the delegated legislation. E.g. an act of parliament can originate from a national emergency,crisis or new development, like The Anti-terrorism, Crime and Security Act 2001 after the 9/11 terror attack.[1] They can also originate from party manifestos, royal commissions, the Law commissions or a private members bill, all which are a reflection of the work of the elected parliament, and therefore also the changes in society. E.g. If a Government minister who introduces a bill, as affected by a change or a need in society, the department regarding this specific area, will publish a green paper, in which he/she outlines the plans, the intention, and seeks advice from organisations that are specialised on the matter or people affected thereby. Civil servants in the department will summarise the advice, and pass them on to a relevant Minister. Together they will publish the white paper, which will be the outline of the ideas. The Bill will be written by parliamentary draftsmen (lawyers), who will use the white paper to do so. The Bill will have to be passed by the House of Commons and the House of Lords. ...read more.

A social institution that has undergone a great deal of change, both socially and legally is the matrimonial institution. Marriage was once the legal size by which families were linked, it provided a sense of security and belonging. It still does. When registering a newborn, whether or not a woman is married, will have an affect on the birth certificate, unless measures have been taken to prove otherwise. Partners left behind after the death of their partner, might have been better protected legally had they been married. And who you are married to, or have been married to, affects who you can marry, as some in-laws will be ?off limits?. But the concept of marriage has changed, it is not as sturdy as it once was, it is not the condition for parenting, but it is still sought after by those who have been prohibited from it. In Marriage Act 1949 it is stated that a marriage has to be between a man and a woman, which prohibits both homosexuals from getting married, but also transgendered people to marry one of the (original) same sex. In 2004 the civil partnership act was entered, which gave the same legal status on a range of issues. (This year however, by the Marriage Act (Same Sex Couples) 2013, homosexuals were finally allowed to marry, and thereby enjoy the legal security of the institution of marriage.[6]) (Both) These acts, are an answer to the change in society. ...read more.

The children were more or less non-existing in the legislation prior to the Childrens act 1989, and now there is legislation determining the rights of an embryo. Or the duty for clinics to consider a possible embryos welfare once it becomes a child. Taking both new legal personalities, new ethics and old values and lawmaking traditions into account. There are areas though that are surprisingly haltering behind, such as the defence of reasonable punishment. ?Not all other countries seem to have the same problems with child abuse as Britain does...?[11] This could be an opportunity to respond to a much needed area of tragic development. However, England has responded well to a number of social and technological changes, even though it is tempting to suspect that there has to be an overhanging financial incentive , in order to get the Law making machine rolling. Word count: 2491 Websites: http://www.weddingguideuk.com/prohibited-marriages/ http://www.legislation.gov.uk/ukpga/2008/22/contents http://www.legislation.gov.uk/ukpga/1990/37/contents http://services.parliament.uk/bills/2013-14/marriagesamesexcouplesbill.html Legislation: Anti terrorism and security act 2001 The United Nations Convention on the RIghts of the Child 1989 (UNCRC) The Human Fertilisation and Embryology Act 1990 The Human Fertilisation and Embryology Act 2003 The civil partnership Act 2004 The Human fertilisation and Embryology Act 2008 The Human Rights Act 1998 The Marriage Act 1949 The Marriage Act 2013 the Children Act 1989 The Adoption of Children Act 1926 The adoption Act 1976 The Divorce and Matrimonial Causes Act 1857 The Matrimonial Causes Act 1923 The Matrimonial Causes Act 1937 Caselaw: Centre for reproductive Medicine v U (2002) EWCA Civ 565 R v Human Fertilisation and Embryology Authority, ex parte Blood (1997) 2 All ER 687 ________________ [1] [2] [3] [4] [5] [6] http://services.parliament.uk/bills/2013-14/marriagesamesexcouplesbill.html [7] [8] [9] [10] [11] ...read more.