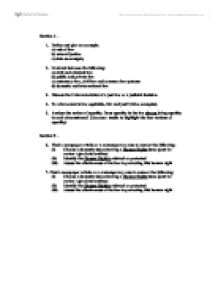 Human Rights : Analyse the notion of equality. Does equality in the law always bring equality in each circumstance

It can be invoked without undue delay - A just law should deal with a legal problem or dispute as soon as possible. This is because people's memories fade and so their evidence becomes less reliable as time passes. Similarly, in criminal matters, an accused person's freedom may be restricted while they are waiting in remand for their trial. This violates the "It leaves people free" characteristic of a just law. The time take for a trial to commence can be quite lengthy for a number of reasons. One being the availability of legal assistance. It is a right of the accused to have legal representation, and some people can't afford legal representation yet are too wealthy for legal aid. This creates a situation where it takes a long time to pay the lawyer, and therefore a long time before the case will be heard. 4. The law aims to be equitable, fair and just. However this is not always the case. It is impossible to be fair to everyone, and it is impossible for everyone to think that a decision is just. Equity is something that has to be aimed for when making a law, and although common law does a reasonable job at this, it doesn't cover key areas of the law in which mitigating circumstances are involved. This is where equity law is introduced. Equity law is designed to cover areas of common law which may seem unfair given the circumstances. An example of this is 'battered wives syndrome.' Under common law, if a woman kills her husband, she will go to gaol. However with equity law, the decision can be based on mitigating factors such as the presence of assault against the woman, which may have lead to her killing her husband. Equity law will then result in a lessor penalty than what common law would've given. Fairness is something else that although the law aims to achieve, in some areas is falls short. ...read more.

B) (i) One of the men release from Guantanamo Bay said through his lawyer that he was subject to "inhumane conditions" as he was beaten, interrogated at gunpoint for periods up to 12 hours at gunpoint (without a lawyer present obviously) and has been emotionally scarred by the incidents. Mr Dergoul claims he was subject to "botched medical treatment, interrogation at gunpoint, beatings and unhuman conditions" He goes on to say it was a "gross breach of human rights." Mr al-Harith (Dergoul's lawyer) told ITV network an interrogator at Guantanamo applied intense psychological pressure, telling him authorities in Britain would seize his family's home and money, turning them onto the street if he did not admit he was involved in terrorism. (ii) This is an obvious breach of human rights. For starters, Mr Dergoul had the right to legal representation denied. Because this was the US, the bill of rights had to be followed. In this case, the 1st amendment was broken, (Congress shall make no law respecting an establishment of religion, or prohibiting the free exercise thereof;) the 5th amendment (nor be deprived of life, liberty, or property, without due process of law;) the 8th amendment (nor cruel and unusual punishments inflicted.) Technically, the US has the right to hold the men in custody, according to the 5th amendment (No person shall be held to answer for a capital, or otherwise infamous crime, unless on a presentment or indictment of a grand jury, except in cases arising in the land or naval forces, or in the militia, when in actual service in time of war or public danger;) However the way Mr Dergoul was treated when he was in custody was a breach of Human Rights. (iii) Due to the lack of evidence, there is little chance that Mr Dergoul will be able to take legal action against those who breached human rights against him. It is unlikely that any one of the perpetrators will admit to their crimes, so unfortunately for Mr Dergoul the crimes will probably go unpunished. ...read more.