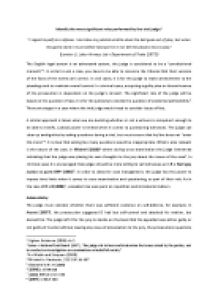 Identify the most significant roles performed by the trial judge.

﻿Identify the most significant roles performed by the trial judge? ?I regard myself as a referee. I can blow my judicial whistle when the ball goes out of play; but when the game starts I must neither take part in it nor tell the players how to play? (Lawton LJ, Laker Airways Ltd v Department of Trade (1977)) The English legal system is an adversarial system, the judge is considered to be a ?constitutional monarch?[1]. In order to win a case, you have to be able to convince the tribunal that their versions of the facts of the events are correct. In civil cases, it is for the judge to make amendments to the pleadings and to maintain overall control. In criminal cases, accepting a guilty plea or discontinuance of the prosecution is dependent on the judge?s consent. The significant role of the judge will be based on the question of law; it is for the judiciary to decide the question of evidential admissibility[2]. There are stages in a case where the trial judge would need to consider issues of fact. A similar approach is taken when we are deciding whether or not a witness is competent enough to be able to testify. Judicial power is limited when it comes to questioning witnesses. ...read more.

However, sang has been overridden by s78 PACE 1984, this section requires all circumstances such as how the evidence was obtained, to be taken into account, in order to determine whether admission would have ?an adverse effect on the fairness of the proceedings?. Discretion in civil cases is found under Rule 32 of the Civil Procedure Rule 1998. There is some confusion as to what constitutes discretion; the admissibility rules concern the worthiness of the evidence whereas exclusionary discretion centres on the notion of relevance and whether that conforms with fairness. There is clear indication as to the strength of judicial power. Ormerod and Birch[17], state that if the judge uses there power to exclude evidence which otherwise admissible, keeping in mind the ?Wednesbury reasonableness? then the courts intervention would be unlikely. However when it comes to deciding what is and isn?t relevant, where do we draw the line? One judge may well have a different opinion than another. It is contradictory that the defendants are protected whist the case is at trial not when the evidence is being put together[18]. Even though law enforcement agencies have to conform to the code of practise, it is for the judge to ensure that evidence was collected fairly and properly. Whether the evidence was relevant and weighty would not hold highly with the judge if he/she feels that it was unfairly obtained and so the requirement of s78 is crucial. ...read more.

It is clear that there has been a drastic decline as to the extent to which a negative comment can be made by a trial judge[36]. Judicial commentary has increased in sexual offences cases, in R v Breeze (2009)[37], the defendant, many years earlier, had been sexually abusing his daughter, the case was quashed because the jury was directed by the judge that there was no reason to lie. It has been argued that the judiciary should have some authority to make comments, although it is difficult to determine where to draw the line between providing direction to the jury based on their judicial expertise and evidence given by judges. Nevertheless, it is invertible that judge?s opinions bear heavily with juries and so must be implied with care. It is possible for the judge to direct the jury to acquit when there is insufficient evidence for the jury to convict but cannot direct the jury to bring the verdict of guilty (DPP v Stonehouse (1978)[38]). Conclusion: It is clear that a judge plays a significant role within a trial, whether it is to assess the applicability of admissible evidence or to maintain composure when giving an opinion. It seems to centres around judicial neutrality. There is fine line between judges who are helpful to ones who push their own opinion on the jury. A judge who is able to conduct his role in a way that in keeps justice and legality is one who will be in support of our adversarial system. ...read more.