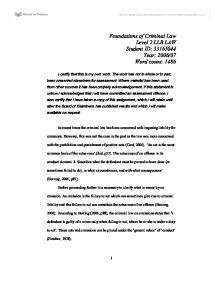 Foundations of Criminal Law Level 2 LLB LAW Student ID: 33165044 Year: 2006/07 Word count: 1486 I certify that this is my own work. The work has not in whole or in part, been presented elsewhere for assessment. Where material has been used from other sources it has been properly acknowledgement. If this statement is untrue I acknowledged that I will have committed an assessment offence. I also certify that I have taken a copy of this assignment, which I will retain until after the Board of Examiners has published results and which I will make available on request. In recent times the criminal law has been concerned with imposing liability for omissions. However, this was not the case in the past as the law was more concerned with the prohibition and punishment of positive acts (Card, 2004). 'An act is the most common basis of the actus reus' (ibid, p57). The actus reus of an offence is its conduct element. It 'describes what the defendant must be proved to have done (or sometimes failed to do), in what circumstances, and with what consequences' (Herring, 2006, p85). Before proceeding further it is necessary to clarify what is meant by an omission. ...read more.

On the other hand there are the offences of omission causing a result or 'commission by omission' offences. Problems arise when these omissions are taken into consideration by the courts where a proof of a result is required (ibid). The duty to act is not clear in such cases, for example where it is argued that the omission has led to the victim's death (Reed & Seago, 2002). These duties to act developed through the common law and are common law duties. To continue, 'a man might incur criminal liability from a duty arising out of contract' (Allen, 2001, p30). A case which illustrates such a duty is Pittwood1 where a gatekeeper at a railway station had a contractual duty to keep the gate shut whenever a train was passing. One day the gate was left open and a train hit a hay cart as it was crossing the line which resulted in the death of a man and another was seriously injured. The defendant was convicted of manslaughter on the basis of the breach of his contractual duty to shut the gate. Furthermore, a duty can arise out of a blood relationship or special relationship between people (Elliot & Quinn, 2006). ...read more.

Finally, some cases appear to involve omissions, however, the courts treat them in terms of a 'continuing act' (Herring, 2006). This can be seen in the case of Fagan7 where the defendant accidentally drove onto a police officer's foot. When the policeman asked Fagan to remove the car, Fagan refused to do it. He was convicted but appealed on the basis that he did not have the mens rea for the act as it accidentally happened. The court upheld the conviction and stated that Fagan's act was a 'continuing act'. This was because he was committing the actus reus of battery by 'exercising force on the policeman's foot' meaning that the act coincided with the mens rea as Fagan 'was aware of the harm he was causing' (Herring, 2006 p91). The whole area of omissions is unclear and at present times it is unpredictable whether the courts will impose liability for an omission. As mentioned above, statutory omissions are uncontroversial. On the other hand, common law duties create controversies and conflicts. Some would say that the approach the courts would follow in the past is preferable, that is to impose sanctions on positive acts rather than for failures to act. However, in modern times the courts seem to follow a different approach in relation to omissions and they would impose liability where appropriate, as seen in the above cases. ...read more.

A good essay on this common exam topic.