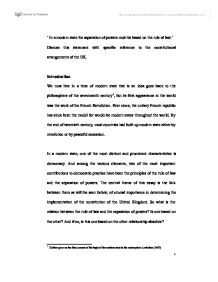 In a modern state the separation of powers must be based on the rule of law - Discuss this statement with specific reference to the constitutional arrangements of the UK.

' In a modern state the separation of powers must be based on the rule of law.' Discuss this statement with specific reference to the constitutional arrangements of the UK. Introduction We now live in a time of modern state that is an idea goes back to the philosophers of the seventeenth century1, but its first appearance in the world was the work of the French Revolution. Ever since, the unitary French republic has since been the model for would-be modern states throughout the world. By the end of twentieth century, most countries had built up modern state either by revolution or by peaceful secession. In a modern state, one of the most distinct and prominent characteristics is democracy. And among the various elements, two of the most important contributions to democratic practice have been the principles of the rule of law and the separation of powers. The central theme of this essay is the link between them as will be seen below, of crucial importance in determining the implementation of the constitution of the United Kingdom. So what is the relation between the rule of law and the separation of powers? Is one based on the other? And if so, is this one based on the other relationship absolute? In order to answer these questions, I will begin with a exploring of the concept of the rule of law. This part will be divided into three sections that mainly derive from A.V. ...read more.

Parliament as a whole forms the legislature, while the role of the judiciary is taken by the courts, and perhaps to a certain extent by tribunals, who adjudicates upon conflicts between state institutions, between state and individual, and between individual.12 Constitutionally, judges are subordinate to Parliament and have no power to challenge the validity of Acts of Parliament. After I have examined the concept of rule and law and separation of powers, now I will turn to argue the essay question that the separation of powers must be based on the rule of law. ?Executive and Legislature/ Executive and Judiciary The essence of separation of powers is that there should be a clear demarcation in function between the legislature, executive and judiciary in order that none should have excessive power and that there should be in place s system of checks and balances between the institutions. The rule of law doctrine as a power regulator, it limits government arbitrariness and power abuse. In more specific terms, how is government arbitrariness constrained? The answer lies in several important principles of rule of law. Firstly, rule of law requires the supremacy of law as opposed to the supremacy of the government or any political party. Dicey said that the rule of law in this context means, "...the absolute supremacy or predominance of regular law as opposed to the influence of arbitrary power, and excludes the existence of arbitrariness, of prerogative, or even wide discretionary authority on the part of the government"13. ...read more.

Constitutional government provides a minimal safeguard for the form of law to be just. In order to have procedural justice, specific procedures have to be either written into statutes by legislators or articulated by independent judges in case law. A constitutional mandate and culture of rights protection is necessary for the establishment of fair and transparent procedures. In addition, there must be independent judges dedicated to legal reasoning to see to it that well-established procedures are complied with. A constitutional structure of separation of powers, checks and balances and independent judiciary is necessary for the effective and consistent implementation and enforcement of well-established procedures. Conclusion There will be no attempt to present an all-sided linkage between the doctrine of the rule of law and the principle of separation of powers above. Three connected points may, however, be made by way of conclusion. First, the rule of law doctrine as a power regulator limits government arbitrariness and power abuse. That is, no institution has more power above the other. Furthermore, it restricts the government in its exercise of discretion, the government has to follow legal procedures that are pre-fixed and pre-announced by the parliament. Secondly, the rule of law set up the preliminary condition for the implementation of judicial independence from two aspects. Conversely, however, the separation of powers acts as a safeguard to the rule of law through two ways. Whatever the shape of future of constitution reform, the rule of law and the separation of powers are two important fundamental principles in democratic running UK. ...read more.