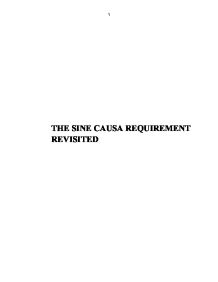 THE SINE CAUSA REQUIREMENT REVISITED TABLE OF CONTENTS 1. Introduction 4 2. A short historical overview 5 3. Comparative law 5 4. The way forward: South African law 8 5. Conclusion 11 6. Bibliography 12 INTRODUCTION Du Plessis, in his journal article1 (and in reference to Scottish law) poses the question of what the notion of absence of legal ground is supposed to mean, and what its' meaning entails on a general level. He concludes that "The Scottish and South African legal systems are currently faced with important choices about the direction that the future development of their mainly civilian uncodified laws of unjustified enrichment should take. An important question which arises in this context is what meaning they will give to the core requirement that enrichment has to be 'without legal ground'."2 It is this meaning, and the context or substance given to it that forms the essence of this discussion. HISTORICAL OVERVIEW Obtaining guidance from Roman law sources as to exactly what sine causa entails proves however problematic as unjustified enrichment was not recognized in Roman law as a source of obligations. In Roman Dutch law the position changes when Hugo Grotius in his Inleidinge tot de Hollandsche Rechts-geleerdheid3 formulates an obligation from enrichment as arising "when one person without legal title derives a benefit from another's property."4 His writings also reflect the variety of meanings that the word causa bore in Roman law and his reference to the absence of a lawful cause seems to bear a ...read more.

THE WAY FORWARD: SOUTH AFRICAN LAW Du Plessis, in comparing the requirements of specific enrichment claims is of opinion that the absence of legal ground is relevant when dealing with both but specifies the following two condictiones:14 1) Condictio data non secuta 2) Condictio sine causa specialis. The absence of a legal ground can bear different meanings depending on which condictio is used, but modern South African law has come to recognize that in all claims based on unjustified enrichment, the general requirement of absence of legal ground need to be met. A narrow and broad meaning can be distinguished when determining the meaning of this requirement. The narrow approach is that of a valid title, such as a contract or court order for example which entitles the recipient to keep the enrichment. Although it can generally be said that the presence of such a title excludes enrichment liability, the absence of such a title does not necessarily give rise to enrichment liability. Additional considerations like absence of a mistake could result in a claim being refused even though a title is absent. Du Plessis is critical of this approach in respect of the additional considerations which he describes as a "Trojan horse" which is effectively the English approach of unjust factors hidden under the guise of the civilian sine causa requirement.The absence of a legal ground is used in a broad sense to describe meeting all the certain specific elemental requirements to establish the general sine causa requirement. ...read more.

She argues that the identification of some factual basis that explains why the transfer is sine causa is essential in many circumstances where enrichment by transfer is at issue (especially in the absence of a failed contract). Scott argues that since the Leistungskondiktion cannot, in such instances, point to a contractual failure out of which a failure of the purpose of the transfer can be inferred, the only way that recovery can be explained is by pointing to the specific reason why recovery should be allowed and she therefore indicates her general support for the current form in which the sine causa element is articulated in South Africa; one in which "the absence of legal ground approach relies on a covert unjust factors approach in order to function".19 CONCLUSION Du Plessis concludes that the meaning that the Scottish and South African legal systems will give to the core requirement that enrichment has to be 'without legal ground' are of importance in determining the direction that the future development of unjustified enrichment. He prefers the option indicated in German law, where the concept of "absence of legal title" is given greater substance simply by the identification of certain claims that govern typical situations of enrichment liability and he argues persuasively for our law to shift away from action-based treatment of the sine causa requirement to an approach similar to the German position. This is the preferred approach that will give the sine causa approach the necessary substance needed in modern enrichment law. ...read more.