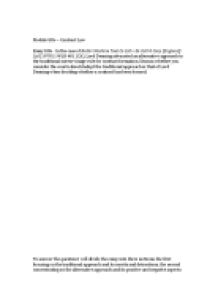 In the case ofButler Machine Tool Co Ltd v Ex-Cell-O Corp (England) Ltd [1979]1 WLR 401 (CA), Lord Denning advocatedan alternativeapproach to the traditional mirror-image rule forcontract formation.Discuss whether you consider the courts should adopt the traditional approach or that of Lord Denning when deciding whether a contract has been formed.

Transfer-Encoding: chunked ﻿Module title ? Contract Law Essay title - In the case of Butler Machine Tool Co Ltd v Ex-Cell-O Corp (England) Ltd [1979] 1 WLR 401 (CA), Lord Denning advocated an alternative approach to the traditional mirror-image rule for contract formation. Discuss whether you consider the courts should adopt the traditional approach or that of Lord Denning when deciding whether a contract has been formed. To answer the question I will divide the essay into three sections; the first focusing on the traditional approach and its merits and detractions, the second concentrating on the alternative approach and its positive and negative aspects before finally considering the wider picture and which approach I believe the courts should adopt. The Traditional Approach The traditional approach to deciding whether a contract has been formed is to look at offer and acceptance. An offer can be defined as an ?expression of willingness to contract on certain terms, made with the intention that it shall become binding as soon as it is accepted by the person to whom it is addressed[1]? and acceptance as ?a final and unqualified expression of assent to the terms of an offer[2].? The court will objectively analyse the negotiation that lead to the acceptance to assess if a contract had been made and if so what terms it was made upon. One key aspect of this traditional approach is the mirror-image rule, which allows for no modifications of an offer for acceptance to be complete. ...read more.

blow in?, and that it was impractical due to the classification of three new terms (material differences, material points and residual terms) which would further complicate proceedings[11]. Although there is considerably less evidence as to how well this method may work due to the House of Lords adherence to the traditional approach it does appear to have merit in a case such as Butler, where the negotiation over terms has been convoluted to the extent that ascertaining offer and acceptance definitively is realistically impossible. It may therefore be more suitable in complex cases to attempt to identify when a general agreement was formed: this was suggested by Treitel when he considered The Satanita, a case that is considered a definitive example of how offer and acceptance are not always sufficient analytical tools[12]. There are of course problems with the alternative approach, the predominant one being that it may undermine the certainty of the law as it relies solely on judicial interpretation and there is no substantial case law to follow. It also risks objectivity, as looking at the negotiation in its entirety may lend itself to a more subjective view, although it is worth noting that Denning wanted to examine the behaviour of the parties (as opposed to what was said) which implies that it would be viewed from the perspective of the reasonable man and therefore still objective[13]. Which Approach Is Preferable? There is no doubt that the traditional method of offer and acceptance is somewhat flawed; however its relatively successful application over the years suggests that for the majority of cases it is fit for purpose. ...read more.

courts have maintained a rigid adherence to the traditional method in more current cases. This can be demonstrated by Tekdata Interconnections Ltd v Amphenol Ltd, a more recent battle of the forms in which Dyson LJ commented that ?The rules that govern the formation of contracts have been long established?that has the great merit of providing a degree of certainty which is both desirable and necessary in order to promote effective commercial relationships[25]?. In light of such sentiment it may be necessary for the traditional method to be the default approach, however it does appear that there needs to be some prearrangement for a more liberal method when required, and I believe the best solution would be to allow for judicial discretion in deciding if a case would benefit from such an approach. Although this leaves the system open to some level of uncertainty (and is admittedly also debatable with regard to the Rule of Law, as theorist AV Dicey believed discretion lead to arbitrary decisions[26]) it can be argued that it provides the judiciary with little more discretion than they already possess and would allow them to address the nature of complex cases more adequately. In conclusion it appears there are positive and negative aspects of both the traditional and alternative approach to contract formation. As one does not appear to be markedly better than the other perhaps a more just approach may be for the courts to use the traditional method of identifying offer and acceptance where possible, and when it proves otherwise employ an alternative method and look for a general agreement. ...read more.