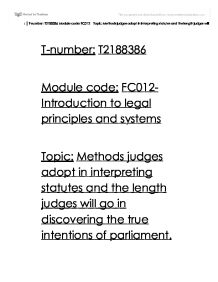 In this essay I will explain the methods or rules of statutory interpretation and consider how far judges are willing to go in discovering the true intentions of Parliament.

That is consideration of law prior to the recent law also deciding what the parliament meant or tried to right before making that law and how it applies to whatever case is being considered. But for this to be carried out four things have to be considered which are; 1. The common law before making the act. 2. The mischief and defect not represented by the common law. 3. The parliament's conclusion or remedy and 4. Why the remedy was given. It helps judges in a number of ways from helping them launch the remedy of the parliament but also gives judges the chance to rewrite statutes which parliament has the only authorisation permission and ability to do. An example of this was in the case of Corkery v Carpenter [1951] 1 KB 102. A person could be arrested if found drunk in charge of a "carriage" on the highway. The defendant had been arrested for being drunk in charge of a bicycle on the highway. The court held that a bicycle was a "carriage" for the purposes of the Act because the mischief aimed at was drunken persons on the highway in charge of some form of transport, and so the defendant was properly arrested. ...read more.

Internal aids include: other enacting words, long title, preamble, short title, headings, side notes and punctuations. External aids include: dictionaries and other literacy sources, practice, other statutes in Parliamentary Material, official reports, Treaties and International Conventions, Parliamentary Materials/Hansard. Presumptions. There are various presumptions that can be applied namely; 1. Presumption against changes in the common law 2. Presumption against ousting the jurisdiction of the courts 3. Presumption against interference with vested rights 4. Strict construction of penal laws in favour of the Citizen 5. Presumption against retrospective operation 6. Presumption that statutes do not affect the Crown These rules of statutory interpretation have enlightened us on the length judges would go in discovering the true intentions of parliament. Over the years judges have come up with ways of interpreting the word of parliament and this has proved advantageous as it helps avoid absurdity, ambiguity, vagueness and harshness in past and recent cases. In conclusion, I have outlined and explained the methods or rules of statutory interpretation judges adopt in interpreting statutes and shown how far they have gone in discovering the true intentions of parliament, I have also discussed the rules of language and stated relevant examples in understanding the different rules of statutory interpretation and how they are used for out benefits. 1984 words. ...read more.