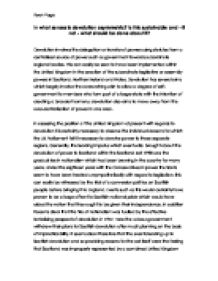 In what senses is devolution asymmetric? Is this sustainable and - if not - what should be done about it?

In what senses is devolution asymmetric? Is this sustainable and - if not - what should be done about it? Devolution involves the delegation or transfer of powers using statutes from a centralised source of power such as government towards subordinate regional bodies. This can easily be seen to have been implemented within the United Kingdom in the creation of the subordinate legislative or assembly powers in Scotland, Northern Ireland and Wales. Devolution has several aims which largely involve the overarching wish to allow a degree of self-government to members who form part of a larger state with the intention of creating a broader harmony; devolution also aims to move away from the over-centralisation of power in one area. In assessing the position of the United Kingdom at present with regards to devolution it is certainly necessary to observe the individual reasons for which the UK Parliament felt it necessary to devolve power to these separate regions. Generally, the leading impetus which eventually brought about the devolution of power to Scotland within the Scotland Act 1998 was the gradual rise in nationalism which had been brewing in the country for many years. Under the eighteen years with the Conservatives in power the Scots seem to have been treated unsympathetically with regard to legislation; this can easily be witnessed by the trial of a conversion poll tax on Scottish people before bringing it to England. Events such as this would certainly have proven to be a large affront to Scottish national pride which would have aided the notion that they ought to be given their independence. ...read more.

Bradley and Ewing enhances this local government comparison in stating that the executive powers are afforded directly to the Assembly and are exercised by the committees. It could be viewed that this asymmetric nature is perfectly fair when one takes into account the "two countries' very different constitutional and governmental history."8 There is certainly, however, a justification for the imparity of powers between these regions. More powers in Scotland can be clearly traced back to the tide of nationalism which had to be stopped by affording greater powers. Similarly, the situation in Northern Ireland of civil politics and growing violence is incomparable with the pacifist situation in Wales where neither strong nationalism nor violence made extreme power devolution at all necessary. It must be said, in contrast, that there are some similarities and symmetrical features which exist between the separate instances of devolution however they appear largely administrative in nature. One of these features is that Wales, much like Scotland, is funded by a grant from Westminster with a discretionary expenditure priority system. In addition the system of safeguards on legislation which exists for all of the regions shows a certain fairness whereby none of the regions is ultimately above or equal to the UK Parliament. A further manner in which devolution of powers in the UK can be seen to be wholly asymmetrical is the failure to implement any plans for the devolution of powers to England when every other member state has, at least, some measures in place. Calls for a devolved English Parliament would certainly not lack justification when the 85% of the population of the UK who live in England are currently underrepresented with regard to a separate assembly. ...read more.