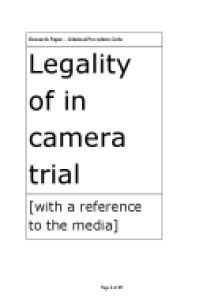 Indian Law. The Legality of In Camera Trials

﻿Research Paper ? Criminal Procedure Code Legality of in camera trial [with a reference to the media] Millo Dinsung 3rd year, B.A, L.L.B. [Hons.] Id no: 1500 Submitted on: 9 September 2010. ________________ TABLE OF CONTENTS TABLE OF CONTENTS TABLE OF CASES INTRODUCTION RESEARCH METHODOLOGY CHAPTER 1- OPEN COURT CHAPTER 2- AN EXCEPTION AND ITS JUSTIFICATION CHAPTER 3- MEDIA?S RIGHT TO SPEECH v. RIGHT TO PRIVACY CHAPTER 4- CASES WHERE APPLICABLE CHAPTER 5- POSSIBLE SOLUTIONS AND ANSWERS CONCLUSION BIBLIOGRAPHY ________________ TABLE OF CASES 1. Chhatisgarh Mukti Morch v. State of M.P, 1996 Cri LJ 3239 (MP). 2. Dhananjoy Chatterjee v. State of West Bengal, (2004) 9 SCC 751. 3. K.M. Nanavati v. State of Maharashtra, 1962 SCR Supl. (1) 567. 4. Kartar Singh v. State of Punjab, (1994) 3 SCC 569. 5. Kehar Singh v. State (Delhi Admn.), 1988 (3) SCC 609. 6. Labour Liberation Front v. State of Andhra Pradesh, 2005 3 ALD (W.P. No. 23220/2004). 7. Maneka Sanjay Gandhi v. Rani Jethmalani, (1979) 4 SCC 167. 8. Naresh Shridhar Mirajkar v. State of Maharashtra, AIR 1967 SC 1. 9. State of Pubjab v. Gurmit, (1996) 2 SCC 384. ________________ INTRODUCTION ?Victims should be treated with compassion and respect for their dignity. They are entitled to the mechanisms of justice and to prompt redress, as provided for by national legislation, for the harm they have suffered?[1] The law suits in general, and criminal trials in particular, are required to be heard in public is a standard that has been observed in legal systems of very different eras and types. With the arrival of first, the print media and then, radio and television the means came into existence for conveying the trial events to a much larger audience than could be accommodated in the courtroom itself. Yet, whatever the extent and nature of the coverage; the norm that trials are open to the public needs to be examined carefully. ...read more.

We must strive to ensure that we are not trampling over the rights of court users while maintaining a flexibility and practicality that have been lacking in traditional court processes. We must ensure that our processes are beyond reproach and that the processes we adopt cannot be criticised by those who don?t, (or don?t wish to), understand our rationale.?[21] In camera trials do not guarantee that the dignity of the victim or witness will be protected - which happened in Bhanwari Devi?s case: where the court had ordered an in camera trial to prosecute accused persons for gang-raping the victim. The trial resulted in isolating the victim behind closed doors, facilitating further victimisation by the defence lawyers, their assistants and accomplices, with the male judge and policemen being mute spectators.[22] CHAPTER 3 MEDIA?S RIGHT TO SPEECH v. RIGHT TO PRIVACY In 1960, the Indian Government first acknowledged the perils of ?trial by media? by abolishing jury trials completely on the ground that such trials would be susceptible to media and public influence. This was a direct consequence of the ?not guilty? verdict pronounced by the jury in the highly publicised case of K.M. Nanavati v. State of Maharashtra,[23] in which Nanavati was tried for the murder of his wife?s paramour and even though all evidence seemed to be pointing at him, he was acquitted by the jury, so influenced were the members by the media and public support for Nanavati.[24] A recent case which may be mentioned here is Dhananjoy Chatterjee v. State of West Bengal,[25] in which a body of intellectuals and a human rights group campaigning for the abolition of capital punishment, on the one hand, and an indignant section of society on the other, had been battling over the execution of Dhananjoy Chatterjee with the media doing the groundwork for both. The case had been so immensely publicized that the press even published the opinions of political leaders as to whether the accused should be hanged or not. ...read more.

The basic objective of criminal law being the protection of the rights of the victim and those who are helping the court in administering justice-like witnesses who testify for or against the accused. With this in mind, in camera trials should be encouraged. As for the media, any opinion they have on the conduct of the trial is likely to be greatly coloured by other circumstances. The press, on the other hand, is much more likely to be objective in its view of the proceeding and see that the public interest is protected. This distinction between the media and the press should and could be kept in mind when the court is passing an order for in camera trial. Isn?t a little bit of canvassing for the rights of the victim necessary so that the court does not completely corrupt the use of in camera or closed trials? The researcher is of the opinion the in camera trial is a boon to the victims of sexual assault and as far as possible in camera trial should be held. But, this would come with a caveat that the court will give a copy of what happened inside the courtroom at the end of the day without revealing the names of the witnesses who have testified and the parties. The need of the hour is a harmony between the media and the in camera trial. The researcher strongly believes that in the greater interest of the society and the victim, in camera trial is totally justified. As for the rights of the accused, he can ask for an in camera trial proceeding too but when it is asked by the victim, he cannot object to it because the balance of convenience here is in the favour of the victim. Also, the society may be affected adversely or in any other manner if details of a gruesome murder or like cases are made public. ...read more.