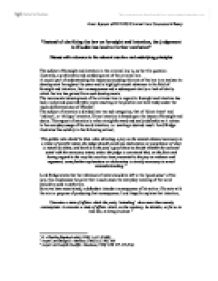 &quot;Instead of clarifying the law on foresight and intention, the judgement in Woollin has lead to further confusion&quot; Discuss with reference to the relevant case law and underlying principles

"Instead of clarifying the law on foresight and intention, the judgement in Woollin has lead to further confusion" Discuss with reference to the relevant case law and underlying principles The subject of foresight and intention in the criminal law is, as the title question illustrates, a problematic and confusing area of the criminal law. A crucial part of understanding the issues surrounding this area of the law is to analyse its development throughout the years and to highlight crucial advances in the field of foresight and intention, their consequences and a subsequent clarity or lack of clarity which the law has gained from such developments. The incremental development of the criminal law in regard to foresight and intention has had a rocky and uncomfortable route resulting in the position we have today under the much deliberated case of Woollin1. The subject of intention is divided into two sub categories, that of 'direct intent' and 'indirect', or 'oblique' intention. Direct intention is based upon the issues of foresight and desire. This aspect of intention is rather straightforward and easily definable as it relates to the everyday usage of the word intention, i.e. wanting a desired result. Lord Bridge illustrates this suitably in the following extract, 'The golden rule should be that, when directing a jury on the mental element necessary in a crime of specific intent, the judge should avoid any elaboration or paraphrase of what is meant by intent, and leave it to the jury's good sense to decide whether the accused acted with the necessary intent, unless the judge is convinced that, on the facts and having regard to the way the case has been presented to the jury in evidence and argument, some further explanation or elaboration is strictly necessary to avoid misunderstanding.'2 Lord Bridge states that the inference of intent should be left to the 'good sense' of the jury, this emphasises the point that in such cases the everyday meaning of the word should be used in definition. ...read more.

A close analysis of the Woollin decision begs the question, has there actually been a clarification of the law of intention or has there been an inherent failure to address the problems produced by Hyam and its conflicting nature to the Woollin branch of cases? As we have discussed, the House of Lords did officially distance itself from the decision, however it is submitted that, by not directly overruling the decision, there have lingered 'Substantive effects of that case on subsequent law' 15and the ruling has failed to address this problem. We now turn to the moral perspective of the argument. The moral aspect plays a crucial part in the analysis of the criminal law and is important to the aspect of the law on intention. As the law in this field is dominantly concentrated upon murder and serious harm, the role of a moral perspective is unmistakable and lies at the heart of the problems associated with this aspect of the law. Woollin leaves crucial issues regarding the moral basis for judging someone a murderer unanswered.16The foresight of virtual certainty can be perceived as both, over and under inclusive, these issues of 'good and bad motive' have been produced from the problematic and complex moral foundation of mens rea itself, which a dominant subjectivist approach ignores at its peril.17 A helpful illustration of the moral viewpoint is to look at the case of Steane18, which is not a murder case, this case was referred to with approval in Moloney and is a case where direct intention alone may satisfy mens rea of an offence, a jury is entitled to find that foresight of a virtual certainty does not equate with intent.19 Such cases lie within the 'moral threshold' of the law and it is irrelevant if the defendant foresaw a result as virtually certain, if the result is in opposition to his moral belief of his actions it is inconceivable that the said result was in fact intended. ...read more.

the probability, however high, of a consequence is only a factor.'28 Another aspect of uncertainty to be considered briefly is whether the Woollin test is merely to be used in murder cases, or whether it can also be applied to cases of intention that do not involve murder. It is clear that Lord Steyn confines his speech to the subject of murder, this means that it is up to the court to deem whether intention is restricted to its core meaning or whether the Woollin direction also apples.29 It is respectfully submitted that through the analysis of the law on oblique intention discussed above the argument proposed in the title question that Woollin has created more confusion to the law is justified. The criminal law is clearly undergoing a process of constant moral judgement and it is apparent that this unclear and complex aspect of the law has been so for a considerable amount of time. Even though the majority opinion is that Woollin was correctly decided on the facts it is also inherently clear that the string of cases that flow in line with Woollin have not tackled the problem presented by Hyam and that this 'coyness' is inherently confusing and has a detrimental effect upon the law in general. A proposed move into the direction of a uniform concept of intention as proposed by academic legal writers such as Pedain is a positive direction to focus the development of the law on intention, this would eradicate the seemingly contradictory aspects of the two distinctly different decisions in Hyam and Woollin, and also significantly reduce the confusion which has proved so prevalent in the current law. A shift away from the strict cognitive and subjectivist nature of the current moral judgement will also aid in the formulation of a coherent and clear legal position in relation to the law on foresight and intention. ...read more.