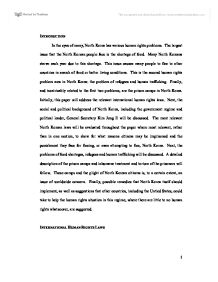 INTRODUCTION In the eyes of many, North Korea has various human rights problems. The largest issue that the North Korean people face is the shortage of food. Many North Koreans starve each year due to this shortage. This issue causes many people to flee to other countries in search of food or better living conditions. This is the second human rights problem area in North Korea: the problem of refugees and human trafficking. Finally, and inextricably related to the first two problems, are the prison camps in North Korea. Initially, this paper will address the relevant international human rights laws. Next, the social and political background of North Korea, including the government regime and political leader, General Secretary Kim Jong Il will be discussed. The most relevant North Korean laws will be evaluated throughout the paper where most relevant, rather than in one section, to show for what reasons citizens may be imprisoned and the punishment they face for fleeing, or even attempting to flee, North Korea. Next, the problems of food shortages, refugees and human trafficking will be discussed. A detailed description of the prison camps and inhumane treatment and torture of the prisoners will follow. These camps and the plight of North Korean citizens is, to a certain extent, an issue of worldwide concern. Finally, possible remedies that North Korea itself should implement, as well as suggestions that other countries, including the Untied States, could take to help the human rights situation in this regime, where there are little to no human rights whatsoever, are suggested. INTERNATIONAL HUMAN RIGHTS LAWS There are many relevant legal materials that deal with the issue of international human rights laws. The information includes many from the following categories: U.N. documents, treaties, conventions, custom, "general principles of law recognized by civilized nations, and, as subsidiary sources, judicial decisions and teachings of qualified publicists and academics."1 This essay will pay primary attention to U.N. ...read more.

3. Killings In addition to being beaten or worked to death, prisoners are also killed through public executions, chemical weapons testing, for eating pig slops, or just for guards' enjoyment and fun. Public executions are a standard practice in and outside prisons in North Korea. The victims are always gagged, usually with a stone,87 so that they are unable to protest. They are then tied to a pole at their chest, sides and knew. Six guards fire three bullets in the chest for a total of 18 bullets. Families of the condemned are often required to attend the public executions and are forced to charge their relatives with "crimes."88 Some people actually go insane from observing these executions. The public execution ground is so crowded that women in the front often get blood splashed on them. Other women vomit, faint or develop mental illnesses, displayed by sudden singing or laughing. "North Korean authorities use public executions as a means of ruling for the purpose of planting fear among the populace and spur awareness about specific social problems."89 Prisoners will be killed also for eating pig slops. The kitchen prisoners always give the left overs to the pigs so that they will be fat and well fed for the officers. The prisoners "envy the pigs for the good food and leisure."90 The ding carrying team also cleans out the pigsties and they will often risk their lives to steal some of the pig slops. If caught, they are shot and killed. Sun-ok Lee witnessed 150 prisoners killed by testing chemical poison on them. During one experiment, the prison officials poisoned cabbage with biological chemicals. The prisoners who ate the cabbage were later committing, bleeding from their mouths and moaning on the floor. They died from the poison. Beatings and killings were not only allowed, but guards were encouraged to do such things. A former guard, Ahn Myong Chol worked at the Hoeryong Prison No. ...read more.