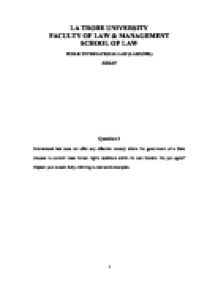 International law does not offer any effective remedy where the government of a State chooses to commit mass human rights violations within its own borders. Do you agree? Explain your answer fully, referring to real world examples.

Humanitarian intervention aims to protect individuals from further mass fundamental human rights violations from occurring under an oppressive government.33 The debate about humanitarian Interventions has been rekindled with the NATO mission in Kosovo. The discussion focuses mainly on the legitimacy of the NATO mission and the conformity with the prohibition of violence and intervention as well as the definition of operational criteria for future humanitarian interventions. 2.2. Operational Criteria The United Nations have to develop generally accepted criteria for the effective exercise of armed forces. Basically humanitarian interventions should only take place under the following conditions:34 For human right protection should peaceful remedies exhausted. The commensurability of remedies regarding appropriateness, necessity and adequacy must always be respected. Moreover there must exist realistic chances for a successful conflict termination . Bruno Simma considers that the threat and use of force by an international organisation such as the UN would only be justified in extreme situations of human rights abuses such as genocide. He argues that in this case more of an obligation is placed upon external forces to intervene.35 However, such an approach raises problems. Could an obligation be codified into international law authorising a state to intervene in situations of genocide? It is doubtful this type of remedy will ever eventuate as powerful sovereign states are unlikely to ever agree to such a precise binding obligation. The reasons one country will embark upon humanitarian intervention into another country are highly political. Sceptics may argue that such a country will only intervene in the domestic affairs of another country when it will benefit their own self interest in some way. The United Nations reflects the different attitudes of the states. While developed countries are not like to talk about disarmament and humanitarian intervention as an obligation, states of the third world avoid human rights issues.36 As in a tacit agreement both parties do not stir to the sensitive issues. ...read more.