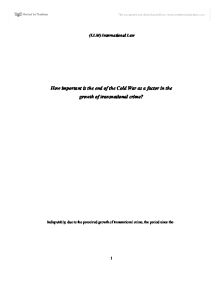 International law - How important is the end of the Cold War as a factor in the growth of transnational crime?

(LLM) International Law How important is the end of the Cold War as a factor in the growth of transnational crime? Indisputably, due to the perceived growth of transnational crime, the period since the early 1990s has been one in which a rising number of countries have identified it as a national security threat. It is true that the end of the last century has been manifested by a number of major political upheavals which transformed the function of the world massively. The end of the Cold War along with the subsequent collapse of the Soviet Union and the related regime change in Eastern Europe, the disintegration of Yugoslavia into its constituent parts, and the changes in the long-standing political systems in Africa and Asia have created a new world order. In addition, the revolutionary improvements in transportation and communication provided by the increased globalization at the beginning of the 1990s have decreased physical barriers around the world, making it easier for criminals to expand their activities and operate in a global environment.1 Transnational criminals, therefore, have benefited from the weakening of certain government institutions, more open borders, and the resurgence of ethnic and regional conflicts across the globe and been engaged in a variety of illicit activities, including narcotics and arms smuggling, trafficking in persons, counterfeiting, and money laundering and other financial crimes.2 As Sterling C. elegantly illustrates in her book, Crime without Frontiers, "the collapse of the USSR, compound by the lowering of frontiers within the EC, has precipitated the largest and most insidious criminal assault in history-the formation of a borderless consortium of organised crime across the globe, a Pax Mafiosa. ...read more.

Facilitated by corruption, crime and terror groups operate together from the Latin America to the regional conflicts of West Africa and the former Soviet Union to the prisons of Western Europe.8 Such a phenomenon, therefore, has been realistically argued that it has been affected by three related factors. First is the globalisation of the economy, which brings citizens and corporations into increasing contact with foreign entities and the end of the Cold war, which contributed to this economic integration and the growth of opportunities for illicit transactions across borders. Second is the rise in the numbers of immigrants, which bring with them social and commercial networks making the enforcement of law and security challenges more difficult and complicated. Finally, the rapidly growing advancing technology with improved global communications has contributed to an expansion of trade and financial markets making it easier and more attractive for criminals to operate in any illicit activity.9 Unquestionably, however, the last decade of the 20th century was marked by the unexpected end of the Cold War and the subsequent collapse of the Soviet Union. Since then, world politics have been dominated by a crisis of identity for the discipline of international relations, and in particular the subset of the field known as strategic or security studies.10 Most of the states, in an attempt to adapt to the new environment created by the end of the Cold War, have redefined their understanding of "security". ...read more.

Current practices of bribery and corruption certainly existed during the times of czars and historically have been an embedded part of the very nature of Russian society.18 Nevertheless, concluding our tour into the world of transnational crime and its growing after the end of the Cold War era, we can easily argue that our planet is facing with a relatively new challenge; the immediate elimination of such criminal activities. The impact that the unexpected termination of the Cold War had on international peace and security may be huge, but was not able to drive alone transnational crime in such a growing. Instead, the combination of a number of factors such as the lowering of economic and political barriers, the end of communist regimes and the founding of fragile new democracies, the increase in legitimate international trade, and the advances in technology that facilitate global communication and transport have undoubtedly contributed to this end. Finally, as former Director of the CIA, R. James Woolsey, described "...the tools of diplomacy are ineffective and irrelevant in dealing directly with these criminal groups. Even under the most difficult, intractable period of the Cold War, if consensus was not possible, communication was, nevertheless, feasible. Not so in the world of organized crime. Although we do negotiate with our key allies and friends to better attack the problem, there is no negotiating table where we can try to work out a compromise or reach a consensus with criminals...."19 For these reasons our future demands greater international cooperation, more harmonized legislation and an increased sharing of intelligence. How successful we are towards this end will surely determine our future. ...read more.