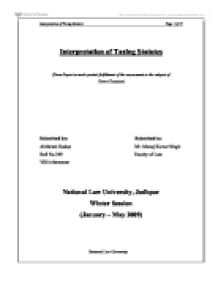 Interpretation of Taxing Statutes (Term Paper towards partial fulfillment of the assessment in the subject of Direct Taxation) Submitted by: Submitted to: Abhishek Kodap Mr. Manoj Kumar Singh Roll No.349 Faculty of Law VIIIth Semester National Law University, Jodhpur Winter Session (January - May 2009) ACKNOWLEDGMENTS I take this opportunity to express my gratitude and personal regards to Mr. Manoj Kumar Singh, for making this research possible. His support, guidance and advice throughout the research project are greatly appreciated. I would like to thank my parents, for encouraging throughout my all semesters and for bringing me into such a position to undertake such a term-paper. My batch mates, for encouraging me to work hard and extending their kind support. Also I am thankful to all those people who helped me in preparing this project. Yours Sincerely Abhishek Kodap Table Of Contents s.no. Pg. no 1 Chapter 1 Taxing Statutes: Introduction 4 2 Chapter 2 General Principles of Strict Construction 5 3 Chapter 3 Evasion of Statutes 9 4 Chapter 4 Land mark Cases 11 5 Chapter 5 Judicial trend in India with regard to Interpretation of Taxing Statutes 14 6 Conclusion 17 7 Bibliography 19 -Chapter 01- Taxing Statutes: Introduction As per Article 265 of the Constitution "No tax shall be levied or collected except by the authority of law" Article 366(28) of the Constitution which reads taxation and tax reads: "Taxation includes the imposition of any tax or impost whether general or local or special and tax shall be construed accordingly." There are three components of a taxing statute, viz., subject of the tax, person liable to pay the tax and the rate at which tax is levied. There are three stages in the imposition of tax (1) declaration of liability in respect of persons and property (2) assessment of tax that quantifies the sum which the person liable has to pay (3) ...read more.

In ascertaining the true legal effect of the series it is relevant to take into account, if it be the case, that all the steps in it were contractually agreed in advance or had been determined on in advance by a guiding will which was in a position, for all practical purposes, to secure that all of them were carried through to completion. It is also relevant to take into account, if it be the case, that one or more of the steps was introduced into the series with no business purpose other than the avoidance of tax. -Chapter 04- Landmark Cases: 1. IRC v. Duke of Westminister18 The Duke executed a series of deeds in favour of his employees in which is covenanted to pay certain weekly sums for a period of seven years in consideration of past services during the joint lives of himself and the employee concerned. It was provided in the deeds that the payments were 'without prejudice to such remuneration as the annuinant will become entitled to in respect of such services as the annuinant may hereafter render' to the Duke. The recipients in all the cases continued in the employment and continued to receive such sums as with the sums payable by the deed made up the amount of the wages or salary payable before the deed and no more. The Dukes contention was that the payment was annual payment and which he was entitled to deduct as surtax, whereas the contention of the Revenue department was that it was payment in consideration of services and as such could not be deducted. The House of Lords rejected the contention of the Revenue and held that when a deed is not challenges as non genuine or a mere cloak to conceal a different transaction the substance of the matter cannot be distinguished from the legal rights and obligations arising under the deed. ...read more.

They cannot go into the intent or the purpose for which the tax is levied or the rate of tax which is levied etc. This aspect clearly falls within the legislative area. The legislature is elected by the people and has been given the power by the Constitution of our country to impose tax and thus it depends on the policy that the legislature deems fit for the levy and collection of tax and thus the court if meddles with this would enter the field of legislation rather than construction. Thirdly where there is any ambiguity in relation to a tax the benefit of the doubt should be given to the assessee. This is because it is the tax payer who has to suffer and making him liable unnecessarily would be clearly unfair. Thus the interpretation of taxing statutes is somewhat different from that of ordinary statutes due to the nature of the statutes. Taxing statutes are mostly complex and require calculations and many deductions. The Income tax Act is very complex and has been amended several number of times. Thus due to the ever changing and flexibility of the statutes there is a different interpretation given to them. Due to the various amendments in the statute and the changing policies of the government it becomes difficult of not impossible for the court to understand the legislative intent. Thus this can also be one of the reasons as to why these statutes are to be construed strictly. It can also be concluded that the judicial trend in the last 75 years has been to make an essential difference in tax evasion and tax avoidance. Tax planning whereby tax is avoided while staying within the legal realm has been held valid. Thus if a person is careful enough to avoid tax, the legislature cannot hold him liable since he comes within the spirit of law. This principle has also been recognized and it respects the creativity and the intelligence of the tax payer vis a vis that of the tax imposing authority. ...read more.