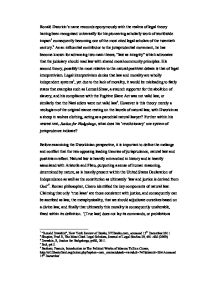 Is Dworkin a natural lawyer? Before examining the Dworkinian perspective, it is important to define the melange and conflict that the two opposing leading theories of jurisprudence, natural law and positivism reflect.

Ronald Dworkin's name resounds eponymously with the realms of legal theory having been recognised universally for his pioneering scholarly work of worldwide impact1 consequently becoming one of the most cited legal scholars of the twentieth century.2 As an influential contributor to the jurisprudential movement, he has become known for advancing two main theses, "law as integrity" which advocates that the judiciary should read law with shared moral community principles. His second theory, possibly the most relative to the natural positivist debate is that of legal interpretivism. Legal interpretivism denies that law and morality are wholly independent systems3, yet due to the lack of morality, it would be misleading to flatly states that examples such as Lemuel Shaw, a staunch supporter for the abolition of slavery, and his compliance with the Fugitive Slave Act was not valid law, or similarly that the Nazi edicts were not valid law4. However is this theory merely a neologism of the original stance resting on the laurels of natural law, with Dworkin as a sheep in wolves clothing, acting as a parochial natural lawyer? Further within his newest text, Justice for Hedgehogs, what does his 'revolutionary' one system of jurisprudence indicate? Before examining the Dworkinian perspective, it is important to define the melange and conflict that the two opposing leading theories of jurisprudence, natural law and positivism reflect. Natural law is heavily entrenched in history and is heavily associated with Aristotle and Plato, purporting a sense of human reasoning, determined by nature, as is heavily present within the United States Declaration of Independence as well as the constitution as ultimately 'law and justice is derived from God'5. Roman philosopher, Cicero identified the key components of natural law. ...read more.

When discussing Hart's model of rules and the discretionary thesis from 'The Concept of Law', it becomes quite apparent that this result acts as an exception, contrary to the jurisprudential merits of positivism. Within this case the plaintiff, attempted to claim for damages, despite having signed a liability waiver, prior to the rental. The court held in favour of the plaintiff and subsequently seemingly rejected any rules that stipulated that such a waiver should be accepted at law, and instead evoked a principled approach associating the social aspect of the dealer and the freedom of contracts as explicitly valuable reasoning within this realm of law. This judgment according to Dworkin is not a departure from the norm as a positivist may interpret the judgment, it was in fact the principles within law, that generously come into play in cases where the appropriate legal rules are not available. "Once we identify legal rules different from legal principles, we are suddenly aware of them all around us. Law teachers teach them, law books cite them, legal historians celebrate them"18. With these principles operating in hard cases, they act as a guide in judicial decision-making. This differs from the positivist view as such cases if applying the discretionary thesis would not comply, and in this particular case, allowing the moral elements of the judiciary to create a sound decision, once again highlighting Dworkin's diaphanous veil of natural law values. Ronald Dworkin's critique of law and adjudication in purely positive law echoes quite strongly with the laurels of natural law. Dworkin explores an initial dimension of social fact sources such as statutes and precedent noted by Dworkin as "legal materials", the final most important dimension denotes 'moral standard[s], those prevalent in the judge's community that will be accepted as morally sound' ...read more.

Dworkin's "one system", suggests that morality is at the foundation of the society, with law branching away from the foundation, thus morality, is definitely in Dworkin's opinion a de rigueur of law. This one-system principle; highlights Dworkin as a neo-naturalist, with his effervescently constant reference to law as a political morality, emphasises the basic composition of a natural lawyer. 'But once we reject the two-systems model, and count law as a distinct part of political morality, we must treat the special structuring principles that separate law from the rest of political morality as themselves political principles that need a moral reading'31. Ultimately, despite Dworkin's best efforts to elude the tag of natural law, all the evidence seems to suggest that ultimately he is a contemporary of this school of thought. Although by dismissing the permanent nature of justice, it is in my personal opinion that he is merely adapting and evolving the theme of justice, as to accommodate the ethnic and moral pluralism embodied in twentieth and twenty-first century western world. His criticisms of positivism by the lack of interpretive inclination instead, governed by a 'a model of rules', suggest a new path, however, it does become clearer upon extensive reading of Dworkin and his virtues, that this is an evolution of natural law, requiring judges, when there is not precedent in "hard cases", the judiciary should allow guidance from morally based principles, in order to in Dworkin's opinion honour justice. However, it should surely just be read as jurisprudence for the future, with Dworkin ultimately being a morality based pioneer, under the natural school of law thought. Furthermore, with obvious parallels with natural law, was this creation simply a neologism, to define his own personal school of thought, acting as a vizard; as ultimately as Dworkin himself notes; 'no one wants to be called a natural lawyer'32. ...read more.