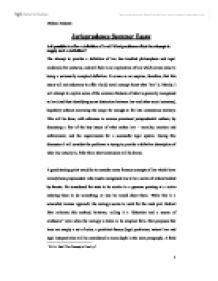 Is it possible to offer a definition of Law? What problems affect the attempt to supply such a definition?

Is it possible to offer a definition of Law? What problems affect the attempt to supply such a definition?

The attempt to provide a definition of law has troubled philosophers and legal academics for centuries, and still there is no explanation of law which comes close to being a universally accepted definition. It comes as no surprise, therefore, that this essay will not endeavour to offer a bold, novel concept about what ‘law’ is. Merely, I will attempt to explain some of the common features of what is generally recognised as law (and thus identifying some distinction between law and other social sciences), hopefully without narrowing the scope far enough to fall into contentious territory. This will be done, with reference to various prominent jurisprudential authors, by discussing a few of the key issues of what makes law – morality, creation and enforcement, and the requirements for a successful legal system. During this discussion I will consider the problems in trying to provide a definitive description of what law actually is. After this a short conclusion will be drawn.

A good starting point would be to consider some famous concepts of law which have already been propounded. John Austin recognised law to be a series of orders backed by threats. He considered the state to be similar to a gunman pointing at a victim ordering them to do something, or else he would shoot them. While this is a somewhat morose approach, the analogy seems to work for the most part. Herbert Hart criticises this method, however, calling it a ‘distortion and a source of confusion’[1] even when the analogy is taken in its simplest form. Hart proposes that laws are simply a set of rules, a positivist theory (legal positivism, natural law and legal interpretivism will be considered in more depth in the next paragraph). A third concept of law was recently put forward by Ronald Dworkin, who criticises Hart and essentially creates the legal school of thought known as legal interpretivism, which rejects the main claims of both natural law and legal positivism and tries to establish law more as a set of legal principles. Dworkin uses the American case of Riggs v Palmer as an example. Could a murderer still be entitled to inherit from the person whom he killed? The court ruled that he could not because, it was said, no-one should profit from one’s own wrong. However, there are plenty of situations in which people do benefit from their own wrong (for example, the law of adverse possession seems to accommodate people who are essentially thieves) and so this could not be reduced into a rule, but merely a principle. The latter theory is the most accepted of the three currently, although it is still quite far from actually providing a definition of law.

One possible general feature of law concerns notions of morality. This is an extremely contentious area of jurisprudence and provides the foundations for many scholars’ attempts to provide definitions of law. Generally speaking, those who claim that law is heavily based on moral values are said to be naturalist lawyers, a school of legal thought tracing its roots back to Aristotle. There is a good case to be made for claiming that law and morality go hand-in-hand. Ignoring the aberrant moral values of the vast minority (such as lunatics), people generally have similar moral values on a significant number of things. There will be many actions prohibited by criminal laws which the public are not too aware of. However, they could still nevertheless guess correctly that the act is illegal simply because their inherent moral values tell them that this sort of immoral deed ought to be prohibited by law. Immediate doubt will arise in a situation which is not so clear cut. Morals can be heavily subjective especially on topics which have plausible arguments for and against, such as euthanasia and abortion. To say that there is a natural law; a single objectively correct solution to these topics, provided for by God, is not a view which is upheld by a majority. In contrast there are legal positivists who say that laws are created by man and carry no inherent connection with morals or ethics. These are ideas originally created by Thomas Hobbes and Jeremy Bentham. Again, this concept has its merits but consider what would happen if a state began to pass laws which were completely in contrast to the moral standards most of its citizens maintained? The result at the very least would be deliberate disobedience and general disrespect for the law, and at worst there would be a revolt against the state. This raises another question: does law require general obedience in order to count as law? On the issue of morality and law, the third school (Dworkin’s legal interpretivism) does not claim a distinct separation between law and morality, although it concedes there are differences. In any case it is still difficult to see from this any distinct way in which one could define the law.

While it seems to be impossible to write a concise and undisputable definition of what law is, it is often relatively straightforward to identify what is a law (although, of course, there are always contentions about what counts as law). On the whole identifying a law is simple. As Herbert Hart points out[2], it is very easy for anyone to cite an example of the law if asked to do so. If a member of the public was asked to provide an example of the law they would probably mention laws preventing murder, stealing, and other crimes. These are examples of state law which is easily recognisable through a sophisticated system of creation and enforcement. The mechanisms behind state laws vary from nation to nation but share the same general characteristics. A state’s legal system needs a body to create and amend the law as well as authorities to enforce it, and as Lon Fuller mentions in his work The Morality of Law[3], it is essential for an effective legal system that the public are made fully aware (or at least given the opportunity to become fully aware) of how their legal system works. Therefore legal systems at state level are a simple way to provide an example of law.

Disputes may arise when it comes to other types of so-called ‘law’. What about laws between nations (international law such as treaties) and even laws which transcend nations (transnational law like religious law and the lex mercatoria). Difficulties occur because often in these circumstances the features which are shared in legal systems at national level are not found. A country cannot be imprisoned, so what can be done if a county violates an international agreement which is said to be international law? How about a Muslim who breaches a provision of the Koran? Who actually enforces the ‘laws’ contained within the Holy book? While other Muslims may proclaim his punishment to be awaiting him at the hands of a supreme deity, such a view is so subjective that it is difficult to label it as an effective punishment (although, of course, if the person at fault also believes his punishment to be awaiting him, there is an argument to be made that it does not matter whether or not his belief is true so long as he believes it). At this point a realisation is emerging that it may not be as simple to identify ‘law’ as simply as one might have first assumed. Indeed, if it was possible to pick out exactly what is and what is not law in every single situation, then the original question of ‘what is law?’ would have already been answered. From this we see that certain mechanisms for the creation, amendment and enforcement of law may not be an essential characteristic of law, although at state level it does seem to be necessary.

Having spent some considerable detail reflecting on what law is, perhaps it might be useful to think about what law is not. Or rather, what would make a legal system ineffective to the point that it cannot really be described as law? Lon Fuller sets out eight ways in which a system of laws could fail. These are: no rules at all (decisions made on an ad hoc basis), a failure to make laws available to those who are to be subjected to it, the abuse of retrospective legislation, a failure to make rules understandable, the enactment of contradictory laws, the enactment of laws beyond the control of the person, too frequent changes in the law, and a significant discrepancy between the laws as announced and their administration. Fuller observes that any one of these failures would result in something that could not properly be called a legal system at all.[4] However there are always arguments as to whether or not a completely ineffective legal system is still law. One, such as Fuller, who subscribes to the natural law theory is very likely to take the view that a failed legal system is not law at all because it does not uphold many of the moral values that a natural lawyer might deem essential. A legal positivist would take the opposite view and say in this case that it is still law, as it has been created and passed by man and the moral considerations are irrelevant when contemplating the validity of a failed legal system.

It has been very difficult to identify even a few of the characteristics which are all common to the notion of law. One thing which seems to be universally accepted is that law compels (or at least persuades) its affected parties to act in certain ways, or not to act in certain ways; either for fear of retaliation from whoever administers the law, or through intrinsic moral standards – a ‘natural’ sense of justice that drives those who believe in it to behave in a good manner. It is also apparent that law must comprise of a series of set orders, rules or principles (depending on one’s point of view) rather than cases being decided on an ad hoc basis. Whether effective enforcement and punishment is necessary is open to debate. We have seen that there are many entities with the title ‘law’ which do not have these features. Any attempt to define law is open to a significant amount of criticism due to the high number of subjective factors involved. Ultimately it seems impossible to provide a definition of law.

Your own view as to which theory is more convincing is welcome/encouraged.