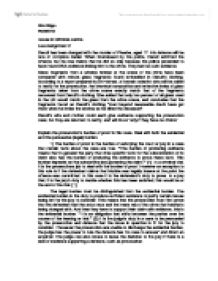 Issues in Criminal Justice Law Assignment 2 Denzil has been charged with the murder of Phoebe, aged 17. His defence will be one of complete denial. When interviewed by the police, Denzil admitted the offence; but he now insists that he did so only because the police pretended to have found DNA evidence linking him to the crime. They had no such evidence. Glass fragments from a window broken at the scene of the crime have been compared with minute glass fragments found embedded in Denzil's clothing. According to a report prepared by Dr Holmes, a forensic scientist who will be called to testify for the prosecution, the chemical composition and refractive index of glass fragments taken from the crime scene exactly match that of the fragments recovered from Denzil's clothing. She added that only two percent of all glass used in the UK would match the glass from the crime scene, and concludes that the fragments found on Denzil's clothing "must beyond reasonable doubt have got there when he broke the window as he killed the deceased". Denzil's wife and mother could each give evidence supporting the prosecution case; but they are reluctant to testify, and will do so 'only if they have no choice'. Explain the prosecution's burden of proof in this case. Deal with both the evidential and the persuasive (legal) burden. 1) The burden of proof is the burden of satisfying the court or jury in a case that certain facts about the case are true. '"The burden of producing evidence means that in general the party that cites specific facts for the substantiation of its claim also has the burden of producing the evidence to prove these facts. ...read more.

The police within the case stated to Denzil that they had found DNA evidence linking him to the murder of Phoebe, under this pressure Denzil then confessed to the police that he had committed the crime, even if he actually hadn't committed the crime. Prior to the passing of PACE, it was unclear whether under the common law discretion a judge was entitled to exclude evidence on the ground that it had been obtained by unfair means. Some Court of Appeal dicta did suggest that this was permissible if the prosecution evidence had been obtained by the means of a trick, by misleading the defendant or employing oppressive or unfair means. [2] From time to time the courts still employ their common law discretion. Ognall J, for instance relied on the common law discretion to exclude some evidence obtained by an under cover police woman in a some what provocative circumstance at the trial of Colin Stagg. [2] In the case of Thompson, Sinclair and Maver [1995] 2 Cr App R 589, Evans, LJ, addressed the issue of judges possessing the power to exclude any defence evidence in trials involving co-defendants. By a judge intervening in a court case to exclude evidence of one defendant might appear that there is a tipping of the scales in favour of one co-defendant. This is a serious matter, to exclude evidence that the first defendant wishes to call. Inevitably where the co-accused are running cut-throat defences, what is of advantage to defendant one will be of a disadvantage to defendant two. A discretion to exclude a co-defendants evidence could create the impression that the judge, no matter how well intentioned, was stepping into the area, this is undesirable. ...read more.

And this evidence is not necessarily credible if it based on a probability. This is because there is the small percentage or probability that the glass fragment on Denzil did not come from the scene of the crime; it could have come from a different window. However there is the possibility that even if the glass fragment on Denzil's clothing does match the ones at the crime, this does not necessarily mean that Denzil was the person who committed the crime of murdering Phoebe, he may have only broken the reason for some unforeseeable reason. Another fact about Dr Holmes' report which can be defence lawyers can object to is the fact that Dr Holmes concluded that the fragments on Denzil's clothing '"must beyond reasonable doubt have got there when he broke the window as he killed the deceased."' This can be objected to because it is not Dr Holmes' or any expert witnesses duty to concur that the victim actually committed the crime, they are not permitted to make statements such as these because this can be misleading for the jury, this may give the jury the view that because an "expert" has said that the defendant got those fragments on his clothing when breaking the window to kill the deceased then this must be true, because they are an expert and shouldn't make any mistakes. However Dr Holmes could have made mistakes which could have lead her to believe that the fragments matched when they did not. Therefore if the jury convict the defendant based on the expert witness's evidence when the evidence is wrong then the defendant would be wrongly sentenced when he may be innocent. ...read more.