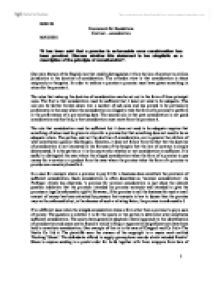 It has been said that a promise is enforceable once consideration has been provided. Discuss whether this statement is too simplistic as a description of the principle of consideration.

On the other hand, it can be argued that it is for the parties to decide what is to constitute good consideration. Nevertheless it would appear that the courts do reserve to themselves the right to decide that a particular act alleged to amount to consideration does not in fact do so. In Thomas v Thomas 7, Patterson J stated that 'consideration means something which is of some value in the eyes of the law'. However, Lord Somervell in Chappell stated that 'a contracting party can stipulate for what consideration he chooses' 8. Consideration for a promise depends on the nature of the pre-existing obligation. The cases can divided in to three categories (i) performance of a contractual duty owed to a third party, (ii) performance of a contractual duty owed to the promisor, and (iii) performance of a duty imposed by law. For example assume that 'A' is promised a sum of money by 'B' if he, 'A', promises to perform an act that he is already obliged to perform. If the pre-existing obligation is a contractual duty owed to a third party, then 'A' will have provided consideration for 'B's promise. ...read more.