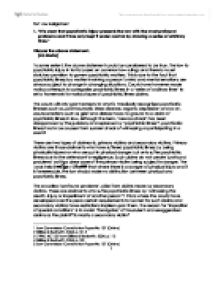 It is clear that psychiatric injury presents the law with the most profound problems and it has only kept it under control by drawing a series of arbitrary lines. Discuss the above statement.

This was the foundation of the modern law psychiatric claims. Thus, all claims had to meet three requirements in order to be compensated for psychiatric illness: the class of persons whose claim should be recognised; the proximity of such persons to the accident; and, the means by which the psychiatric illness was caused. As will be discussed, modern cases of secondary victims still follow Lord Wilberforce's 'control mechanisms' but the Law Commission in 1998 published a report to further enhance the law to psychiatric claims omitting two of Lord Wilberforce's control mechanisms. The first requirement is that in order to claim for psychiatric illness there has to be a tie of love and affection for the person affected, 'the closest of family ties'8. Generally in English courts the relationship of husband/wife and parent/child are the only ones where damages have been recovered.9 Lord Wilberforce held this restriction as he believed that 'defendants cannot be expected to compensate the world at large'10. In Alcock v Chief Constable of South Yorkshire11Lord Keith believed that fianc�(e)s should also be included as with spouses and the decision was a little harsh as the plaintiff in Alcock lost her fianc� whom she had a relationship with for four years. The Law Commission however, is deemed to propose a statutory 'fixed list' of relationships. ...read more.