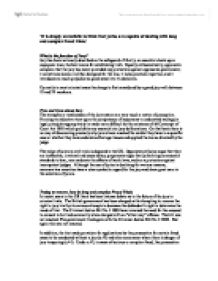 'It is simply unrealistic to think that juries are capable of dealing with long and complex fraud trials.'

'It is simply unrealistic to think that juries are capable of dealing with long and complex fraud trials.' What is the function of Jury? Jury has been variously described as the safeguard of liberty; an essential check upon unpopular laws; the best means for establishing truth. Equally enthusiastically, opponents complain that the jury has never provided any protection against oppressive government; it sometimes shows a willful disregard for the law; it lacks practical expertise; and it introduces as much prejudice as good sense into its decisions. Currently in most criminal cases the charge is first considered by a grand jury with between 12 and 23 members. Pros and Cons about Jury The strengths or weaknesses of the jury system are very much a matter of perception. Forming an objective view upon the competence of laypersons to understand and apply legal principles appropriately is made more difficult by the existence of s8 Contempt of Court Act 1981 which prohibits any research into jury deliberations. On that basis there is no way of discovering precisely why jurors have reached the verdict they have in a specific case or whether they have understood the legal issues and applied the law as directed by the judge. The value of juries in civil trials is disputed in the UK. ...read more.

In the case of jury tampering, there would have to be a substantial likelihood of tampering taking place to make it necessary in the interests of justice for the trial to be conducted without a jury. Considerable reservations exist as to the ability of juries to deal with prosecutions involving complicated allegations of fraud. "Special juries" made up of persons experienced in dealing with commercial or financial matters were abolished by s18 Juries Act 1949. In more recent times, the emphasis has been on providing for pre-trial hearings before a judge to identify the contentious issues in complicated cases, in equipping courts with new technology to make the visual display of documents on video screens a possibility, and permitting the use of glossaries and the reception of complex or technical evidence in a simplified form. How to overcome the shortcoming The Frauds Trial Committee in 1986 recommended that juries be replaced in serious fraud cases by a fraud trial tribunal comprising a judge sitting with 2 lay assessors. The Committee concluded that long fraud trials are so complex that it is unreasonable to expect lay jurors to cope with such evidence. Lord Auld concurred with those views and CJA 2003 includes provision allowing for trial by judge alone in complex fraud trials. ...read more.

recognized the particular difficulties faced by jurors in fraud trials but, somewhat surprisingly in the light of its recommendations in relation to offences triable either way, it did not suggest the removal of the jury from such cases. It merely recommended that s10 (3) of the CJA 1988 should be amended to permit judges to put the issues before the jury at the outset of the trial. In his extensive Review of the Criminal Courts 2001, Sir Robin Auld LJ recommended that in serious and complex frauds, the nominated trial judge should have the power to direct trial by himself and 2 lay members drawn from a panel established by the Lord Chancellor for the purpose or, if the defendant requested, by himself alone. In the White Paper preceding the CJA 2003, it was claimed that each year 15 to 20 complex fraud trials emerged that would be better dealt with by a judge sitting alone: Part 7 of the CJA 2003 provides for exactly that possibility. Section 43 allows the prosecution to apply for a serious or complex fraud trial on indictment in the Crown Court to proceed in the absence of a jury. Before granting the application, the court has to be satisfied that the length or complexity of the trial is likely to make it so burdensome upon the jury that, in the interests of justice, serious consideration should be given to conducting the trial without a jury. ...read more.