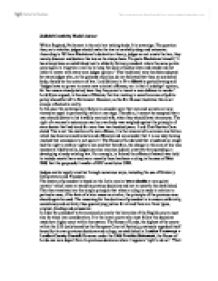 Judicial Creativity Model Answer Within England, Parliament is the sole law making body. It is sovereign. The question then, as to whether judges should make the law is inevitably deep and extensive. According to William Blackstone's declaration theory, judges no not create the law, they merely discover and declare the law as its always been. To quote Blackstone himself, 'it has always been an established rule to abide by former precedent where the same points come again in litigation a well as to keep the scale of justice even and steady and not liable to waver with every new judges opinion.' This traditional view has been adopted by many judges who, on the grounds of policy, do not believed that they, an unelected body, should be the creators of law. Lord Salmon in R v Abbott is quoted having said 'Judges have no power to create new criminal offences, nor in their Lordships' opinion, for the reason already stated, have they the power to invent a new defence to murder'. Lord Slynn argued, in the case of Brown, that law making in sensitive areas of public policy should be left to Parliament. However, as the R v R case illustrates this is not always reflected in reality. In this case the contemporary factors to consider were that men and women are now viewed as equal in partnership within a marriage. Therefore, it cannot be accepted that a man should dictate to his lawfully married wife, when they should have intercourse. ...read more.

Distinguishing also allows for flexibility within the rules of precedent as it is a method used by judges to avoid following what would otherwise be a binding precedent. For this to be done, a judge will point out some difference in the facts between the previous precedent and the present case that he is trying (he draws a distinction between the two cases). As a result of this, he can say that he need not follow the previous decision because it was based on a different set of facts. For example, the case of Wilson was later distinguished from the likes of Brown in relation to rules of consent on the grounds of public policy. This will allow for creativity as it enables unique judgements to be formed on the facts of the case that are evident. Judicial creativity can also be seen in Statutory Interpretation. In the English legal system Parliament is sovereign, which means that laws made by Parliament must be obeyed. In order for judges to apply the law, they must interpret it. A series of approaches have been developed to aid judges in the interpretation of statutes. They are known as the literal, golden and mischief approach. Some judges prefer one rule to another and other judges choose whichever approach suits their needs at the time. The literal rule gives all the words in a statute their ordinary meanings, even if the outcome is absurd, for example, in Whitely v Chappell, the accused impersonated a dead person at ...read more.

If judges take it upon themselves to create law, the elected body of Parliament will no longer be able to dictate, for it's people, what the law should be. It could therefore be argued that it is unfair to let an unelected body make the decisions on behalf of a whole country of people. The courts and judges creating this law aren't even accountable to the general public. Members of Parliament also wish to represent the views of it's constituent and can also be influenced by the public. This is done through the media or lobbying. However a quote taken from The Times newspaper illustrates how the public feels about judges. 'A PRIVATE members club for privileged white men: this is still how Britain's senior judiciary appears to the public, undermining confidence in our whole legal system'. It is therefore clear that it is much more beneficial for the elected body of Parliament to create law as opposed to judges, who appear to be lacking a fair representation of today's multicultural society. 'For among the forty-one Court of Appeal judges, there are just two women and of the twelve judges in the House of Lords there is only one woman. Furthermore, a judge from an ethnic minority background has never been appointed to either of these courts, and there is only one black woman in the High Court'. The newly created Judicial Appointments Committee will seek to select judges to represent the wider community they're serving however, it is clear that the role of Parliament remains that favourite for the creation of law. ...read more.