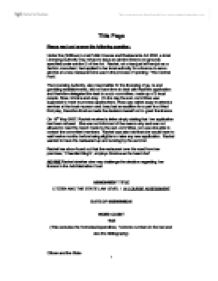 Title Page Please read and answer the following question: Under the (fictitious) Local Public Houses and Restaurants Act 2005, a local Licensing Authority may refuse to issue an alcohol licence on grounds specified under section 3 of the Act. Rachel, who has just left her job as a fashion consultant, had applied to her local authority for a licence to serve alcohol at a new restaurant she was in the process of opening, "The Central Pork". The Licensing Authority, also responsible for the licensing of guns and gambling establishments, did not have time to deal with Rachel's application and therefore delegated the task to a sub-committee, made up of 3 local people, Ross, Monica and Joey. On the day the sub-committee was supposed to meet to process applications, Ross was called away to attend a seminar at the local museum and Joey had an audition for a part in a West End play, therefore Monica made the decision herself not to grant the licence. On 19th May 2007, Rachel received a letter simply stating that her application had been refused. She was not informed of the reason why and was not allowed to read the report made by the sub-committee, nor was she able to contact the committee members. Rachel was also told that she would have to wait twelve months before being eligible to make any new application. Rachel wanted to have the restaurant up and running by the summer. ...read more.

A statute may expressly state the purpose, or it can be implied by the court. As the reasons for refusal of a license under section 3 of the Local Public Houses and Restaurants Act 2005 are not known; it is difficult to determine if the Licensing Authority (LA) has acted ultra vires. However Rachael could argue that the LA should not have delegated such an important task out to a sub - committee due to time constraints17. Each case should be dealt with professionally. Furthermore is the sub - committee qualified to make the decisions under s.3 of the Act? Most likely they are not. The LA could also have taken into account irrelevant matters18; perhaps thinking that a fashion consultant will not be able to run a restaurant or serve alcohol. 11. Bromley London Borough Council v Greater London Council [1983] 1 AC 768; contrast with Westminster Corporation v London and North West Railway Company [1905] AC 426 12. Vine v National Dock Board [1957] AC 488 13. Carlton v Commissioner of Works [1943] 2 All ER 560 14. Roberts v Hopwood [1925] AC 578; see also R v Somerset County Council ex p Fewings [1995] 3 All ER 20 15. Wheeler v Leicester City Council [1985] AC 1054 16. Vine v National Dock Board [1957] AC 488 17. Roberts v Hopwood [1925] AC 578 Again however it is not clear, as the question does not give any fact. Likewise as the purpose and functions of the Act are unknown it would be difficult for Rachael to claim improper purpose as the basis for illegality. ...read more.

Even though Monica only had to show her a basic level of fairness33 for her new application; the whole affair seems very harsh on Rachael. Remedies 28. R v Gaming Board for Great Britain ex p Benhaim and Khaida [1970] 2 QB 417 (gaming case) 29. as explained by Parpworth, Pg 306 (13.67) 30. Dime v Grand Junction Canal (1852); see also ex p Pinochet Ugante [2001] 31. McInnes v Onslow Fane [1978] 3 All ER 211 It is quite clear that Rachael has grounds for claiming JR and can be awarded (if successful) one of the following remedies; a prohibiting order, a mandatory order or a quashing order. Rachael would be seeking a quashing order which would in effect quash the decision against her so that she could re-apply. However the process of JR is not concerned primarily with the individual's outcome, but instead with putting right a wrong decision of procedure from a public body. There is nothing to say that should Rachael re-apply and the correct procedure was followed that she would definitively be given a license for alcohol. She may subsequently be rejected again; legally. In conclusion, there is no doubt that the LA are a public body whose decisions Rachael can challenge using JR. Rachael will claim JR on two grounds; illegality due to the improper delegation of power, and also procedural impropriety for failure to apply natural justice to her case regarding both bias and hear both sides. Rachael will be seeking a quashing order as remedy but as always the decision is that of the courts. ...read more.