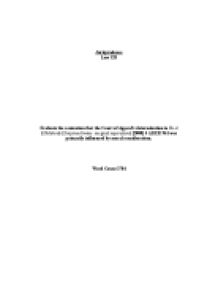 Jurisprudence - Conjoined Twins - Evaluate the contention that the Court of Appeals determination in Re A (Children) (Conjoined twins: surgical separation) [2000] 4 All ER 961 was primarily influenced by moral considerations

﻿Jurisprudence Law 328 Evaluate the contention that the Court of Appeal?s determination in Re A (Children) (Conjoined twins: surgical separation) [2000] 4 All ER 961 was primarily influenced by moral considerations. Word Count 2704 ?This Court is a court of law, not of morals, and our task has been to find, and our duty is then to apply the relevant principles of law to the situation before us- a situation which is quite unique?.[1] Lord Justice Ward delivered the leading judgement in Re A clearly stating this early in his decision in an attempt to highlight the positivist approach with which the Court of Appeal should decide the case. However, does the statement accurately encompass the reasoning by which the decisions were reached by Ward and his counterparts? To fully understand; one must first attempt to understand the somewhat turbulent relationship between law and morality, analyse the case itself and evaluate each of the respective judgements in an attempt to understand each of the Lord Justice?s rationale. One will then conclude by way of overview. The concept of law and morality being intertwined has intrigued scholars since the time of Plato and Aristotle. Natural law provides a description of the point the two come together. It is a widely misunderstood moral concept, not legal concept, its principal aim, is that, what naturally is, ought to be.[2] Plato?s ideals came from his views of human ...read more.

Ward L.J. was faced with a difficult dilemma, one which did not fully manifest itself until he had been presented with an image of the twins. He remarked how the medical documentation had not prepared him for the desperate sadness and shock that had greeted him. Ward echoed Lord Goff in Airedale NHS Trust v Bland[22], the apparent precedent for his decision. ?The question is always whether the treatment would be worthwhile, not whether the patients life would be worthwhile?.[23] Ward judged the situation as a choice between two evils. The decision was therefore to find the least detrimental choice. One can not help to see a parallel between this viewpoint and the utilitarian argument involving the hypothetical trolley case.[24] Ward argued the operation was in Josie?s interests, while stating Mary did have a right to life, but little right to be alive.[25] It was expressed that in any event Mary was killing Josie, draining her life- blood. This idea that Mary was living on ?borrowed time? makes Mary seem culpable in terms of conventional legal morality.[26] One is struck with the image of Dracula, feeding on a victim, monstrous as well as evil.[27] The point made here is this emotive language seems to be detrimental to the image of Mary, making it seem there is only one child to consider. ...read more.

inclined to agree that the decisions appear to look for the morally ?soft option?, giving the answer the public at large would want.[47] It is still a murder and all the judgement seemed to do was make it morally permissible to do so. The lack of precedent available meant there was no settled principle in law the Court of Appeal could act on.[48] This bending of the law to achieve a utilitarian goal where two lives were at stake has ultimately opened the door to other potential lawful acquittal cases where euthanasia is the reason for killing.[49] It seems reasonably clear, that regardless of the decision of the Court of Appeal it would have split opinion, and this was accepted at the outset by Lord Justice Ward. It can be said that there was a positivist approach taken in attempting to decide this case, but the unique issue that was involved, with no legal precedent, could ultimately not be fitted into the current law at the time, allowing for morality to creep in. Throughout the case the parents of the twins were given the upmost respect for their decision, but were always in the minority with regards to their viewpoint, despite supporting views from the Archbishop of Westminster and Pro-life by their side. One would agree with Barbara Heuson that the Judges were able to disagree with the parents and substitute their own moral views. ...read more.