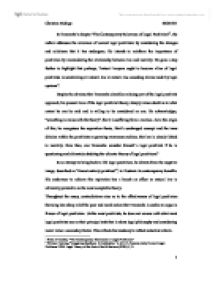 In Tamanaha's chapter "The Contemporary Relevance of Legal Positivism"1, the author addresses the relevance of current legal positivism by considering the changes and criticisms that it has undergone. He intends to reinforce the importance of positivism by reconsidering the relationship between law and morality. He goes a step further to highlight that perhaps, "natural lawyers ought to become allies of legal positivists in scrutinizing all natural law or natural law-sounding claims made by legal systems". Despite the obvious that Tamanaha classifies as being part of the legal positivist approach, his present view of the legal positivist theory, sharply raises doubt as to what extent he can be said and is willing to be considered as one. He acknowledges, "something is amiss with the theory", that it is suffering from a malaise. As to the origin of this, he recognises the separation thesis, Hart's unchanged concept and the inner division within the positivists as growing awareness outlines, that law is closely linked to morality. How then, can Tamanaha consider himself a legal positivist if he is questioning and ultimately doubting the ultimate theory of legal positivism? In an attempt to bring back to life legal positivism, he diverts from the negative image, described as "almost entirely pointless"2, to illustrate its contemporary benefits. His endeavour to achieve this aspiration has a knock on effect as natural law is ultimately pointed to as the most acceptable theory. ...read more.

Rather than criticising the Shari'a itself, Grand Ayatollah Hossein-Ali Motazei holds the judicial system liable for misusing the law. Along these lines, Tamanaha had argued the possibility that judges during the nazi regime had diverted from statutory law. What we can subsequently deduct is the author's attempt to manipulate citizens by diverting the failure as a result of positivism to the judicial system. Consistent with naturalism, Islamic countries have adopted, as a result of modernization, similarly to positivism, the idea that law and morality are closely linked. They have as a result, borrowed substantial bodies of laws and legal institutions from Western legal systems. Tamanaha knowledge's the fact that Islamic law possesses a characteristic that renders it uniquely problematic for legal positivism, namely that Islamic law is inherently moral. "There is no space here for separating law and morality". This is coherent with natural law and therefore sounds a lot like natural law as the author correctly points out. This nevertheless only applies where morality plays a substantial part, not in a system that considers stoning to be morally respectable. Arguing that the Shari'a and natural law are strikingly similar because both have religious origins, illustrates the author's failure to draw a reliable comparison. The author is conscious of the paradoxical assertion that "even when law and morality are explicitly fused, the thesis of the separation between law and morality still applies". Tamanaha is nonetheless incapable to recognise the ineffectiveness the theory of positivism amounts to. ...read more.